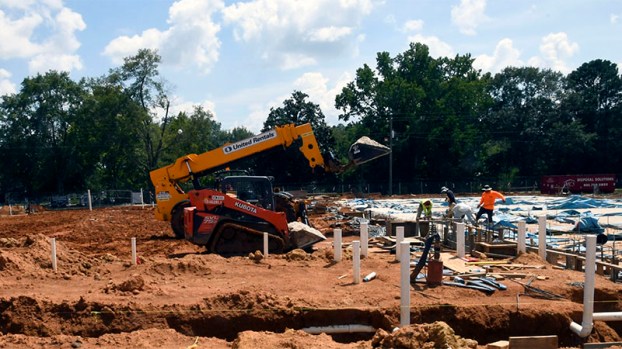 The Pearl River School District’s Board of Trustees met for its monthly meeting Sept. 10, which included an update on the bond construction projects going on within the district.

Progress has continued across the district, and Burleson said building B and building C on the Carriere campus were both 99.9 percent done with just a few punch list items left.

A water line at the high school will have to be traced and replaced after springing a leak.

Burleson said because the facility in question was built so long ago, the exact location of the line is unknown, so workers will have to map the line out before it can be replaced to fix the leak.

“It’s in the courtyard area where the storm drainage is going, so it’s not going to affect the auditorium or any other construction. It’s just one of those things you don’t anticipate,” Burleson said.

The water pressure at the multipurpose building currently only reaches 40 PSI, but Burleson said in order for a sprinkler system to fight fires effectively the PSI must be 70.

The district is currently in communication with the water service provider to see if they’ll increase the pressure on their end, but if not the district will have to buy a water tank and water pump for the building to make sure the correct PSI level is reached.

Other than that, work on the multipurpose building is continuing ahead of schedule with the project forecast to be complete by September of 2021.

Burleson said the AB building on the elementary campus is likely to be done within the next two weeks with workers now putting the final touches on the inside of the building.

The library on the elementary campus has also been completed. Burleson said staff should start moving in next week.

Change Order No. 4 for Wharton Smith totaled $84,025 and Burleson said it included work on roofing, fencing, footings and other miscellaneous projects.

Change Order No. 5 for Wharton Smith totaled $36,018 and will pay for additional mill work regarding sets of cubbies for classrooms.

Change Order No. 6 for Wharton Smith totaled $5,950 and will fund the installation of three water bottle fillers in the BC addition on the elementary campus.

Change Order No. 7 totaled $8,557 and goes towards the installation of 12 hand dryers in the restrooms of the AB, BC and AK buildings on the elementary campus.

Change Order No. 9 for Wharton Smith totaled $8,605 and will be used to replace four exterior doors at the elementary school’s library.

Following the approval of these motions the Board adjourned.

The next regularly schedule Board meeting will be Oct. 8 at 5:30 p.m.

Poplarville’s run-off election to determine who will fill the empty Board of Aldermen seat has been postponed to Oct. 13.... read more