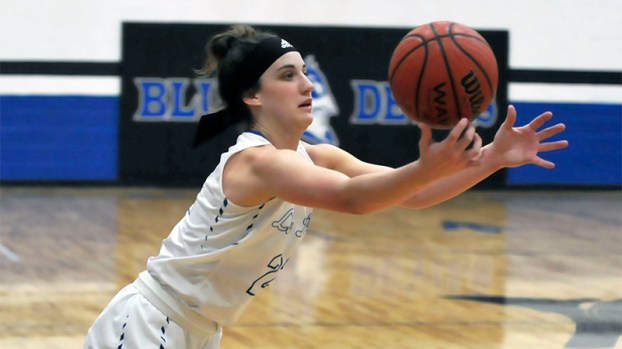 Graduated: Payton Lee, pictured, is one of the seniors the PRC Lady Blue Devils are going to have to replace this basketball season. File photo by Jonathan Mitchell.

The Pearl River Central girls basketball team has had a busy offseason adapting to new Head Coach Cliff Bauer’s systems, and are working to continue improving before the start of the season.

The introduction of a new coach, along with the loss of several starters from last season’s 18-11 team, means the practices so far have seen the athletes go back to basics.

There will be an influx of youth for the Lady Blue Devils this year and the offseason is meant to help get those players game ready.

Not only do the athletes need to be prepared physically, but also mentally to handle high pressure situations in game.

One athlete who will be looking to embrace those big moments this year will be sophomore Hannah Mitchell.

Mitchell got significant playing time last year as the second string point guard, but Bauer said her part this year will be bigger than before.

“She works hard and she’s going to be great. She’s still very young, but her role will be completely different than it was last year,” Bauer said.

Mitchell is one of several young athletes who will have to step up this year after the team lost several seniors to graduation at the conclusion of the last season.

Getting the players to work together, understand each other’s tendencies and cover for one another is something the group still has to work on.

“The chemistry is big. I don’t even have a solidified starting group yet. I’m trying to build chemistry and that’s one thing we’re trying to put in before we start playing games at the end of October,” Bauer said.

The process is important for multiple reasons.

An individual athlete must be able to connect with a teammate and have an inherent understanding of their style of play for the best possible result on the court.

Two individual athletes may be talented players, but if the chemistry isn’t there then the team’s performance will suffer come game time.

“It’s tough and it is a tall task. Even when they look good in practice, chemistry comes with game time and experience. One of toughest things is finding the correct group that has chemistry and the right mindset,” Bauer said.

Bauer said that the Lady Blue Devils’ season is expected to start at the normal time, but that is subject to change depending on how the pandemic changes over time.

Getting experience on the field can help a player’s growth and for the Picayune Lady Maroon Tide soccer team this... read more