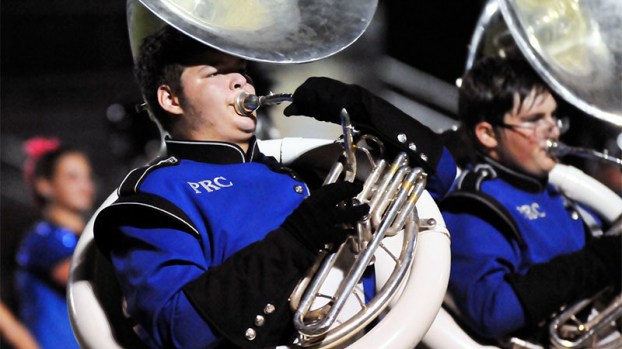 Making Do: The PRC band has had to overcome a lot to put on its halftime show this year, but Band Director Kelcey Becnel said her musicians have been up to the task so far. File photo by Jonathan Mitchell.

The Pearl River Central band had its first performance last week and Band Director Kelcey Becnel said her musicians did a solid job of putting on a good show even with rehearsal limits in place.

The band is only able to rehearse as a whole once a week because of COVID-19 restrictions, but that didn’t stop the musicians from doing their job last Friday night.

“I thought that given the circumstances of this year that all the students performed really well. They were as prepared as I could have hoped for them to be. I’m really proud of my students,” Becnel said.

There were several COVID-19 protocols in place for the game. The band was not allowed to have its normal pre game warm up in the band hall and musicians had to wear a mask when not playing.

“I think it didn’t really affect them. I think my kids came to do their job, which was to be supportive of the football team and put on a really good performance, regardless of people in the stands or crowd size,” Becnel said.

This year the band isn’t allowed to travel with the football team to away games due to the ongoing pandemic, so last Friday night’s performance was the first of the season.

For some musicians, it was the first performance ever during a varsity level football game, and while there may have been some jitters it wasn’t enough to affect the unit’s overall tone.

“There were probably some nerves from the freshmen because they have not gotten the full experience that we normally do as a band program, but I think overall our students were excited to be able to have the opportunity to perform. I think this year has led to them having a sense of thankfulness for being able to participate in these activities,” Becnel said.

The band only performed about a quarter of its full show last week. Becnel said the hope is to perform at least half of the show in two weeks time when the Blue Devils football team is back at home.

However, before then Becnel wants to make sure all of her musicians are well versed in their specific parts.

The band hasn’t implemented marching aspects into the show yet because of the rehearsal restrictions, so right now the musicians are conducting halftime performances while standing still.

This places a greater emphasis on getting the music 100 percent correct, so the upcoming practices will hone in on the itty gritty details of next week’s musical pieces.

“The biggest focus is musicality, just making sure everyone is pulling their weight and playing to the best of their ability. Our show is best presented when it is performed with those musical elements that are written,” Becnel said.