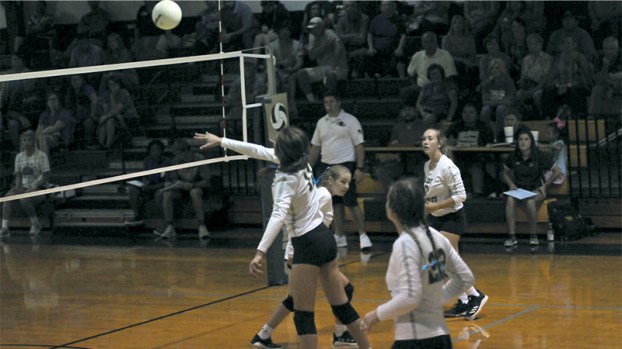 Building Foundation: The Lady Hornets are now 1-1 on the season after a tough loss to the Pass Christian Lady Pirates. File photo by Jonathan Mitchell.

After losing the first set, the Lady Hornets responded by winning two sets in a row to take a 2-1 lead.

Poplarville needed to win just one more set, but after Pass Christian narrowly won the fourth set the Lady Pirates carried that momentum into the fifth set and won by just two points 15-13 to secure the victory.

Head Coach Robin Jeffries said her team got better after the win, and the close contest with an established program like Pass Christian showed the Lady Hornets are on the right path.

“It’s a well established program and we did exceptionally well. I thought we adjusted really well from the last time we played. We improved dramatically in such a short amount of time and I was really pleased with what I saw,” Jeffries said.

It was only the team’s second game so there are still areas of improvement.

Chemistry on the court is being built and the athletes are getting used to each other’s playing styles so they can better work with one another under pressure.

Knowing where a teammate is on the court and when to go for the ball is something the athletes will look to get better at as the season progresses.

“There’s always improvement with that, but we are getting better. We’re doing specific drills that just hone in on that,” Jeffries said.

Now Poplarville will have its first home game of the season when it takes on the North Forrest Eagles Tuesday evening.

Jeffries said that finally getting to play in front of the home crowd will be a boon for her team after playing the first two games of the season on the road.

“I think the more crowd the better, especially when you can create some excitement,” Jeffries said.

There wasn’t much time to practice between games, but Jeffries said the players are ready for more competition as they use practice time to improve. “(We’ll focus on) just fundamentals and putting it together, then probably spend the last 45 minutes scrimmaging,” Jeffries said.

Barbara Sheffield qualified to run in the 2020 Boston Marathon that was set to take place in April of this... read more