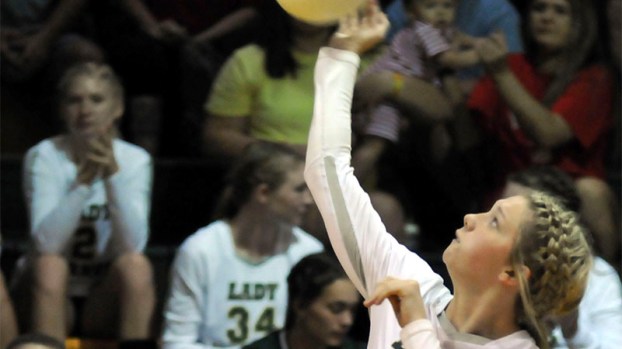 Good Start: The Poplarville Lady Hornets volleyball team is now 2-1 on the season after a dominant 3-0 win over North Forrest. File photo by Jonathan Mitchell.

The victory moved Poplarville to 2-1 on the season with both wins coming in straight sets.

Meanwhile the team’s only loss came in a five set thriller against Pass Christian.

Head Coach Robin Jeffries said her team has continuously improved as the season has progressed, but there are still some inconsistencies that needed to be fixed.

This is only the program’s second year of existence, so the ups and downs are to be expected.

Still, the Lady Hornets are off to a strong start and that may come down to leadership provided by the team’s senior members Jaycee Bridgers, Cassidy Cartwright, Janna Peterson, Kat Adcox and Lana Welborn.

Jeffries said as the program becomes more established, more and more athletes will learn to love the game of volleyball and follow in the footsteps of the program’s veterans.

Next up for the Lady Hornets is a game against the Bay High Lady Tigers.

The Lady Tigers and Lady Hornets have matching records of 2-1, so Jeffries is anticipating a tough fight.

Later in the season there may be more game planning and strategizing when it comes to an opponent’s strengths and weaknesses.

For now, because of the program’s inexperience and the ongoing learning process for the players, Jeffries said the focus will be inward to hone in on how the Lady Hornets can improve.

“I think it’s something that’ll come later on once we learn the sport a little more. We’re just trying to stick with fundamentals and get those down.”

“Be in the right place, work on positioning and communicating, and as you get better the scouting will come eventually,” Jeffries said.

It’s still early in the season, so there are several more games before district starts, but Jeffries wants to try and get everything locked down before the games start having playoff implications.

The first three games have seen the athletes play well, but not always to the best of their abilities.

Against Bay High, Jeffries wants that to change.

Football games to look different for the Picayune Maroon Tide