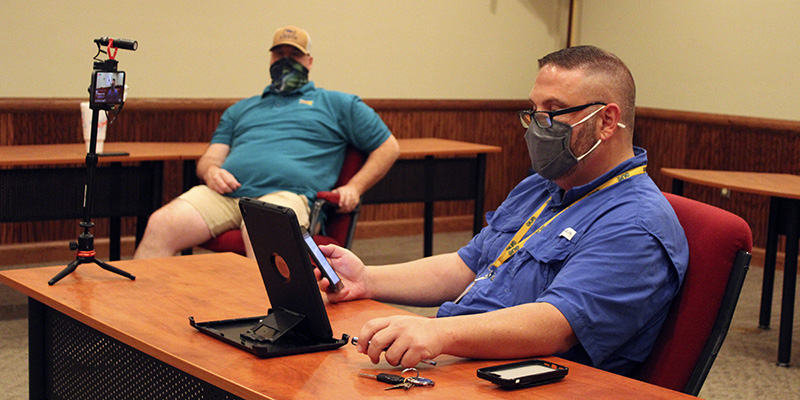 The Board also cancelled its regular meeting scheduled for Tuesday evening and set a meeting for Sept. 30 at 5 p.m. to approve the year-end claims docket. The Board also adopted the final budget for the fiscal year ending Sept. 2021.

The run-off election was postponed so that Poplarville residents would not have to attempt to vote during severe weather. Mayor Rossie Creel said he spoke with both candidates in the election, Daniel H. Brown and Jacob Cochran, and both understood the need to postpone the vote.

The election has been postponed to Tuesday, Oct. 13, at the recommendation of both the city clerk and the city attorney. No attorney general opinions have been rendered related to the subject. So, the Board will be following normal elections laws, which means the Board needed to have at least three weeks of announcements of the runoff election date before it could be held, said both City Clerk Jane O’Neal and City Attorney Manya Bryan.

O’Neal said that the recommendation was meant to err on the side of giving voters more time to learn about the new election date to ensure no voters are disenfranchised.

Fire Chief Jason Bannister updated the Board that based on Hurricane Sally’s track as of the 10 a.m. update, it was expected to enter the southwest corner of Pearl River County as a hurricane and exit the northeast corner of Pearl River County as a tropical storm over a three day period. A projected 10-15 inches of rain is expected over that three day period, said Bannister. However, by Monday afternoon, new projections state the rainfall could be much less.

Bannister informed the Board that the local shelters are located at 121 Rodeo in Poplarville and at 501 Laurel Street in Picayune.

The city of Poplarville was still under a boil water notice as of the Board’s midday meeting, although the Mayor was hopeful the city would get water test results back later in the day Monday. The city’s water tower was struck by lightning, causing a loss of pressure in the system and the need for the boil water notice.

The telephone lines at City Hall were down Monday, said Creel, although any phone messages being left for City Hall were being received by city staff via email.

The Board declared a local emergency due to the expected impact from the storm at a special called meeting Sunday.