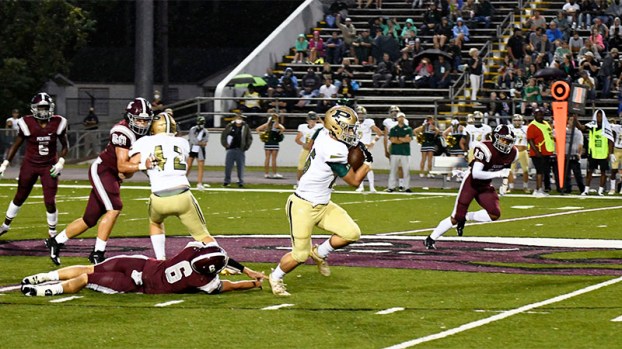 Poplarville hoping to be more physical this Friday

The Poplarville Hornets are coming off a tough 31-21 loss to the Picayune Maroon Tide last week and will now head into their final non-district showdown of the year against the St. Stanislaus Rock-A-Chaws.

St. Stanislaus is currently 3-0 while Poplarville is 0-3 heading into the matchup.

Head Coach Jay Beech said this week in practice is all about figuring out what went wrong against Picayune.

When mistakes are found they can then be studied and rectified, which is what Poplarville is hoping to do before kickoff Friday night.

Sophomore quarterback Matt Will was a bright spot for the Hornets using his arm and feet to terrorize the Picayune defense.

Will went 1-5 through the air for 21-yards, while also rushing for 36-yards and two touchdowns against the Maroon Tide.

The defensive end turned quarterback has continuously improved this season and Beech hopes to see more progress out of his young QB.

“I think he’s done a great job. He hadn’t played much quarterback even in junior high or anything, but we needed him to play there and he’s worked really hard to get himself in this position. He has improved a lot from last year,” Beech said.

Running back DJ Richardbey was another weapon offensively for the Hornets who will look to build off a strong performance against Picayune.

The junior had 169 rushing yards on 13 carries, and has solidified his position as one of the team’s most physical runners. Beech said Richardbey’s performances has won the trust of the staff, so another big performance could be on the cards for the junior when Poplarville takes on St. Stanislaus.

“He can get us 3 or 4 yards even if we don’t block the play well. He just has to get more confident and get more experience at that position. I think he’ll have a great year for us,” Beech said.

The Rock-A-Chaws are a physical team with good size that’ll test the Hornets’ running game.

It’ll be a battle in the trenches and Beech said his team will have to come out with the right amount of tenacity to defeat St. Stanislaus.

“I know we have to be extremely physical against those guys. They’re going to play hard and they’re well coached. That’s our chance to win, we have to be more physical than they are,” Beech said. Poplarville will go on the road to face St. Stanislaus and the game will begin at 7 p.m.