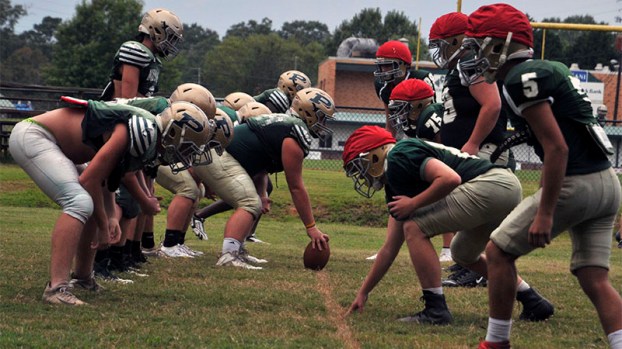 Line Of Scrimmage: Players on both sides of the ball line up prior to the snap during a practice drill. File photo by Jonathan Mitchell.

Poplarville football sets sights on first game of the season

The Poplarville Hornets football team had a tune up game against East Central in a jamboree matchup last Friday that the Hornets won 21-7.

The jamboree wasn’t an official game that’ll affect the Hornets’ record, but it did give the team its first taste of competitive action since last year’s 4A state championship game. It was essentially a preseason game for Poplarville as they prepared for the start of competition Sept. 4 against Jefferson Davis County.

The matchup against East Central not only saw Poplarville come away with a win, but it also showed Head Coach Jay Beech where the team is in terms of preparedness for the start of the season. “I thought our effort was good I thought we played fast and physical. We need to clean up our tackling a little bit. There’s also a bit of execution on offense and special teams we need to clean up,” Beech said.

There were some restrictions in place the team had to follow regarding COVID-19. The Mississippi High School Athletic Association is currently having teams follow a list of protocols to try and limit the spread of the virus.

However, it was an obstacle the Hornets were able to overcome as the players enjoyed their first night back on the football field. “We were really excited. We had to battle through the adversity of the coronavirus and wear a mask, but we handled it well and had a really good time,” Beech said.

The team’s game against Jefferson Davis County will take place at Dobie Holden Stadium on the campus of Pearl River Community College.

Poplarville originally had Biloxi scheduled as its first competitive game of the year, but after Biloxi postponed extracurricular activities due to a COVID-19 outbreak the Hornets had to find another opponent.

Jefferson Davis County answered the call and Beech said the game will take place at PRCC because the stadium there only has a 25 percent attendance restriction as opposed to Gov. Tate Reeves’ previous ruling of only allowing two spectators per participant into any high school sporting event.

However, on Monday Reeves amended attendance restrictions for high school sporting events so that they now are also able to operate at 25 percent capacity.

The late change of venue and opponent won’t alter any of the Hornets’ plans when it comes to preparation.

“We’ll have a normal week to get ready for them and they’ll have the same amount of time to get ready for us. We have to block and tackle really well, eliminate turnovers and win the special team game,” Beech said.

The matchup at PRCC is set to begin at 7 p.m.