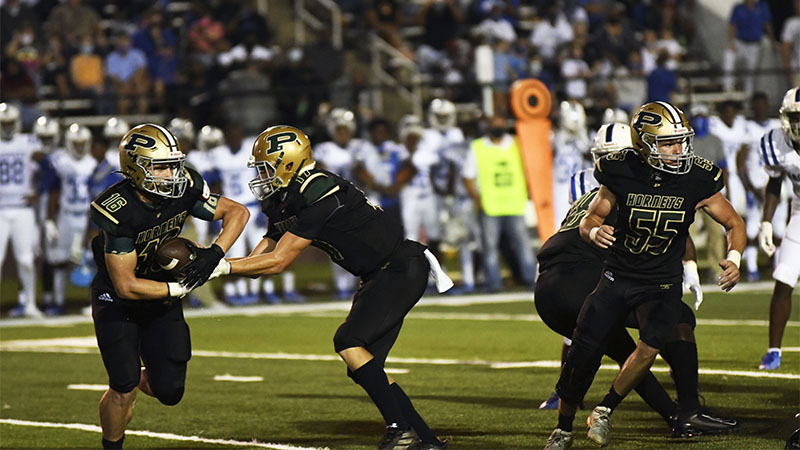 It was the first home game of the season for Poplarville. There were attendance restrictions in place due to COVID-19.

The stadium was only at 25 percent capacity and face coverings were required for all attendees.

Once the action started, the two teams were evenly matched and were tied heading into the final quarter, but the Warriors were able to score a touchdown in the fourth to seal the win.

The loss dropped Poplarville to 0-2 this season.

“I thought we played harder, faster and with a lot more confidence. I was proud of our effort. We just did some things that ended up costing us the game at the end,” Poplarville Head Coach Jay Beech said.

Junior running back DJ Richardbey led the Poplarville rushing attack with 84 yards on 14 carries and a touchdown.

Sophomore quarterback Matt Will also got in on the scoring action with a rushing touchdown of his own.

Beech said Will has done a good job taking control of the offense in his first year as a starter, and that over time the unit as a whole will improve.

“Our quarterback Matt Will is a young kid, but he’s running the offense effectively. He dropped back to pass a couple times (against D’Iberville), but the offensive line allowed too much pressure, so the offensive line has to pick it up on pass protection,” Beech said.

Kicker Zach Carpenter went 2-2 last Friday on extra points. Beech said the trust he has in Carpenter comes from knowing his kicker will deliver when called upon.

“He did a great job for us. He had some good kick offs…we do have confidence in for him for sure,” Beech said.

On the other side of the ball Beech said his players are slowly starting to come to terms with this year’s new defensive system.

The changes made in the preseason required some adaptation from the athletes, but now with two games under their belts the improvement was noticeable.

“I think our guys are learning our new system a little better. We’re playing a little faster now. We didn’t miss quite as many tackles last week, and played a little more confident last week,” Beech said.

Now the Hornets will turn their attention to the Picayune Maroon Tide with Poplarville travelling to Lee-Triplett Stadium Friday night to take on the Maroon Tide.