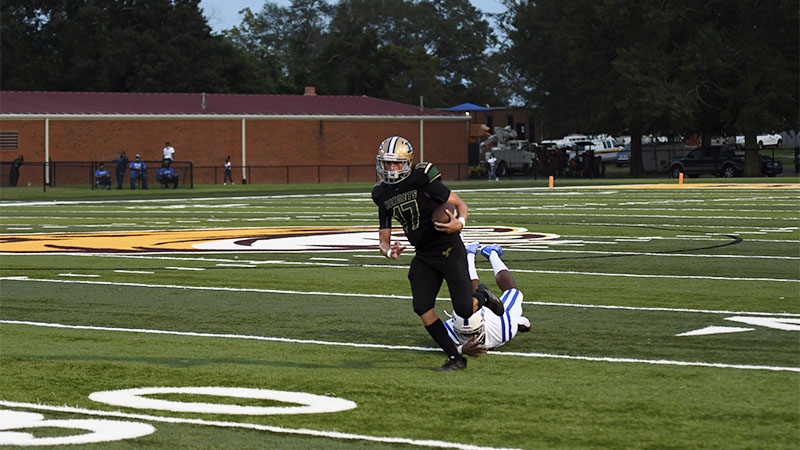 Quick Feet: Quarterback Matt Will escapes from a defender and heads down the sideline for a first down. Photo by Jonathan Mitchell.

The Poplarville Hornets took on the Jefferson Davis County Jaguars to kick off the high school football season, and ended up losing the tight game 13-7.

Even with a delayed season due to the pandemic, it was still the Friday night lights experience, if slightly altered.

The two teams were evenly matched and it showed on the field.

The scoring started early with the Poplarville offense marching down the field behind a strong rushing attack and physical offensive line.

Once the Hornets got in the red zone it came down to execution, and running back Greg Swann found a running lane and burst through the line of scrimmage to score the first touchdown of the game.

The 15-yard scamper put the Hornets up 6-0 with Zack Carpenter coming on to kick the extra point.

The attempt went wide left, putting the Hornets in a six point lead into the second quarter.

Just three minutes into the second quarter, the Jaguars responded with a score after a fake punt fooled the Hornets into conceding a first down.

The Jaguars speed outside posed a danger all night for the Hornets and it eventually cost the Hornets when a 40-yard touchdown run brought the score to 6-6.

Jefferson Davis County’s extra point was good, and the Jaguars took the one point lead into halftime.

The defensive slugfest continued into the second half with teams consistently trading possessions as the offenses struggled to get anything going.

In the end, it was the special teams who won the game for the Jaguars thanks to an 80-yard punt return for a touchdown with just under 10 minutes remaining in the game.

The extra point was no good, but the Jaguars’ defense remained stout for the rest of the game.

There was hope for the Hornets late in the fourth quarter, but an incomplete pass from sophomore quarterback Matt Will on fourth and eleven at the Jaguars’ 14-yard line turned the ball over to Jefferson Davis County.

The Jaguars then proceeded to run out the clock and seal the victory over the Hornets.

“We’re obviously disappointed we lost. We came out to win and it hurts. We played hard, (but) just made some mistakes,” Beech said.