Poplarville earns first win of the season on the road 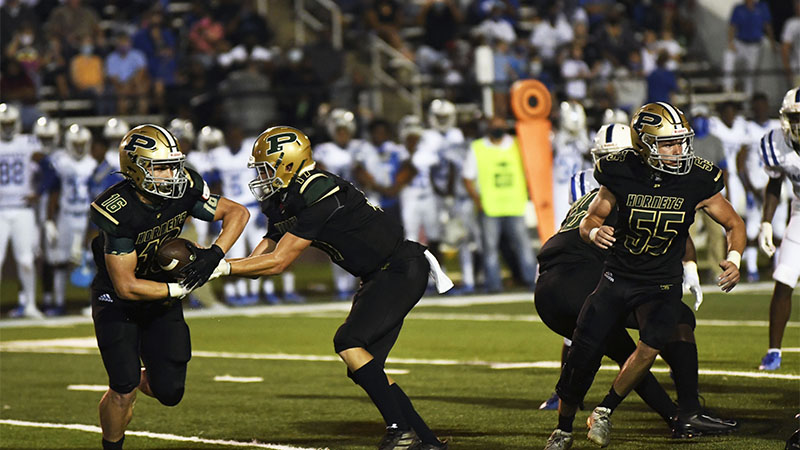 Mesh Point: Running back Greg Swann takes a handoff from quarterback Matt Will during a recent game. Swann had 133 yards and 3 touchdowns against St. Stanislaus last weekend. Photo by Jonathan Mitchell.

The Hornets were 0-3 heading into the matchup, so it was important Poplarville get a positive result before starting district play this week.

It was an away game for Poplarville, but that didn’t stop the Hornets from handily defeating the Rock-A-Chaws for their first win of the season.

“I was happy with our performance to get our first win. We played really hard, didn’t have any turnovers and no pre snap penalties. Defense played well, tackled well and special teams played well for the most part,” Head Coach Jay Beech said.

Running backs Tyron Holston and Greg Swann had massive games on the ground for Poplarville.

Holston had 113 yards and a touchdown on 10 carries while Swann had 133 yards and 3 touchdowns on 18 carries.

Head Coach Jay Beech said both players have been an integral part of the team’s offense, and will hopefully continue to produce as the season progresses.

“They’ve both played hard all year. They’re blocking well for each other. They’re getting used to where the blocks are setting up and making good cuts. Both of them are having a good year for us,” Beech said.

The strong rushing attack wouldn’t be possible without an experienced, physical offensive line.

Four out of the five starters are seniors and that veteran presence helps when it comes to executing the Hornets’ offense.

The defense also played especially well last Friday against a St. Stanislaus offense that was averaging 18 points per game heading into the matchup.

Beech said the unit as a whole has continually gotten better this season.

The players have had to learn a different defensive system this year under new defensive coordinator Jacob Aycock. But now that the athletes have had multiple games, and plenty of practice time to adjust, the new system is paying dividends.

“We’re obviously getting better and better at it. Coaching staff wise we’re still at this point trying to put people in the right spots. As the year goes on and we’re playing we’re still looking to move a guy here, move a guy there. We’re not settled on that yet, but we are getting better,” Beech said.

The game against St. Stanislaus may have been the team’s first win of the season, but the Hornets aren’t planning on it being their only victory as they seek another shot at a state championship.

The start of the season wasn’t what the team had hoped, but the athletes pulled through last Friday in an important way.

“I’m definitely proud of them. We’ve been getting them to work hard and keep their confidence through this tough non-district stretch. Now we’ve been rewarded with a victory and we’re feeling a lot better about ourselves now,” Beech said. The Hornets will play Forrest County this Friday night with kickoff set for 7 p.m.