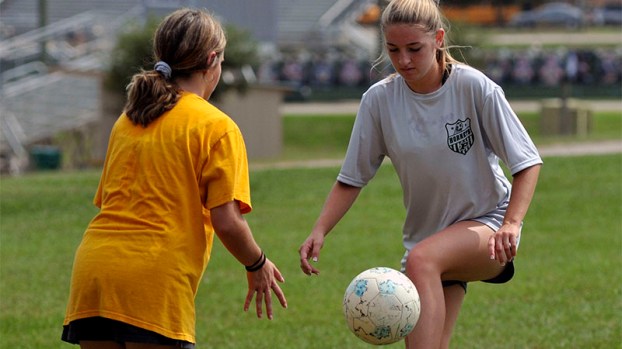 Dual Athletes: Many of the runners in Poplarville's cross country program also play soccer, so they'll already be in a good spot conditioning wise when practices begin. File photo by Jonathan Mitchell.

The Poplarville boys and girls cross country programs held tryouts this past week for interested athletes, and will now move into practices as they prepare for the fall season.

Luke Gipson, head coach of the boys portion of the program, said when it came to determining who made the team it was all about who had a foundation to work with.

The tryout was simple enough, run one mile.

Gipson said he only asks athletes to run a mile because there will be people who show up for the tryout without any preparation and he doesn’t want any of the runners to have a medical issue.

“I just have them do a small sample, see if they pay attention, follow directions and take coaching. It’s efficient,” Gipson said.

Now the team will move into workouts and the true preparation phase for the start of the season.

It’s a slow build strategy that Gipson uses to get his athletes in competitive shape.

The practices will consist mostly of long runs, but only with specific parts of the race being timed.

The first week the athletes will have the first mile of their run timed, and then be able to finish the last 2.25 miles at their own speed.

This gives the athletes some knowledge of where they stand, and allows Gipson to analyze if a runner needs to increase their pace.

The routine will continue each week with progressively longer portions of the run being timed, until the arrival of competition at which point the athletes should have a good grasp of how fast they’ll be able to finish the race.

Many of the runners are also soccer players, meaning a certain level of conditioning is already expected, and Gipson said he’s returning his top five runners from last year.

Gipson said the returning talent has him excited about his team’s chances of winning district again this year.

“I’m excited about returning our top five runners. They’ll be older and more experienced, and will have ran courses before, especially the state course, so they will know how to pace themselves better,” Gipson said.

Beth McShea, who coaches the girls cross country program at Poplarville, said her roster hasn’t been set yet as she waits for some stragglers to tryout. McShea’s program shares a lot of similarities when it comes to Gipson’s as far as practice routines and tryout philosophy.

McShea said a big part of determining an athlete’s readiness is how they handle the strain and discomfort of the long distance runs.

“If you’re walking in the first mile, then three miles will be bad. Even though some of them ran the whole thing, if they were having to stop, or said something like, ‘I have a cramp in my side.’ I pay attention to stuff like that,” McShea said.

The schedule is still a work in progress, but it’s likely the athletes will have at least a couple weeks of training to get ready for any type of meet.

“This year due to COVID-19 we’re not going to run as many meets as in the past to avoid the crowds. Our first meet likely won’t be until October,” McShea said.

The Poplarville Hornets took on the Jefferson Davis County Jaguars to kick off the high school football season, and ended... read more