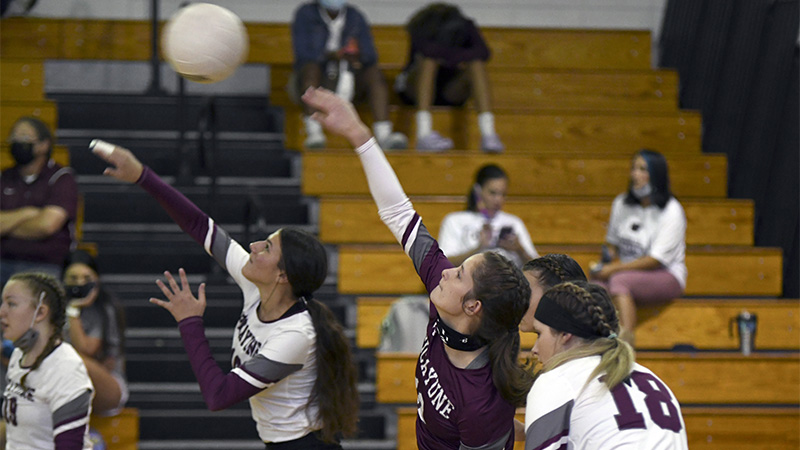 It was the second game in a row at home for Picayune, but the Lady Maroon Tide weren’t able to use the home court advantage to pull out a win.

Head Coach Courtney Dickens said her team started slowly and got better over time, with the competition getting heated in the third and final set.

A common theme for the Lady Maroon Tide so far this season has been positional shifts for players as Dickens tries to best manage her team’s injuries.

One such player who found themselves in a new position against the Lady Tomcats was Kyra Hawthorne.

Normally an outside hitter, Hawthorne found herself orchestrating the offense against Stone County as she took over the setter role for the first time in her career.

Dickens said even with the change occurring on such short notice, Hawthorne was able to perform well and give her team the opportunity to stay in the game.

“We practiced with her there Monday and went through our rotations with her as the setter and that was her first time playing that position. She did an excellent job having never played that position before,” Dickens said.

There are some downsides that come with the constant changing of the line up, and one of those downsides is that break downs in communication are more common.

Teammates that may not be used to playing alongside each other may be indecisive on when to go for a ball, so Dickens said communication would be a point of emphasis in practice.

It’s been an uneven start to the season for Picayune, but Dickens isn’t making any excuses.

The Lady Maroon Tide have an away game against the Harrison Central Lady Red Rebels Thursday evening, and Dickens said she’s hoping her players use these early season experiences to improve and grow stronger mentally.

“I really believe in battling through adversity and I think that really makes a great team. I think this will make us better in the long run. I don’t see why we couldn’t come out on top and I believe that with anybody we play, if we play how I know we can,” Dickens said.