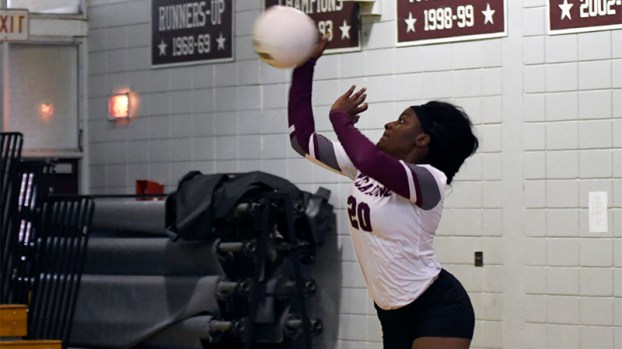 There are only two other teams in Picayune’s district, Hattiesburg’s Lady Tigers and Long Beach’s Lady Bear Cats.

The limited number of teams means the loss to the Lady Bearcats hurt, but isn’t extremely detrimental to Picayune’s chances of making the playoffs.

It was a tough pill to swallow for the Lady Maroon Tide athletes.

“I noticed they were more encouraging to each other, which is what we’ve been trying to get them to do all year.”

“That’s something that stood out to me last night, not necessarily playing wise, but that is a positive thing we can build off of,” Dickens said.

Stockstill is the team’s libero, a defensive specialist position, while Hannah and Hathorne serve as two of the team’s main hitters.

All three are seniors so Dickens said their contributions to the team this year helped the program grow.

“Those three have really stood out this whole year,” Dickens said.

That’s a lot of games in a short period of time, but the players have been conditioning since June for situations like this.

Dickens said she’s not worried about fatigue affecting her players thanks to the workouts the athletes have been taking part in all year.

“I’m really not concerned about it because we have really done a lot of conditioning this year. (Plus) we had all of last week off, so I feel like they’re pretty rested up,” Dickens said.

The team won’t have much practice time because of all the games, so Dickens is hoping her team is able to improve in certain areas on the fly.

“I would really like to see our passing clean up because our setters have improved tremendously and I think they’re making better decisions and understanding the offense. They’re not setting the same player every time and they’re starting to spread the offense out,” Dickens said.

Poplarville hoping to be more physical this Friday

The Poplarville Hornets are coming off a tough 31-21 loss to the Picayune Maroon Tide last week and will now... read more