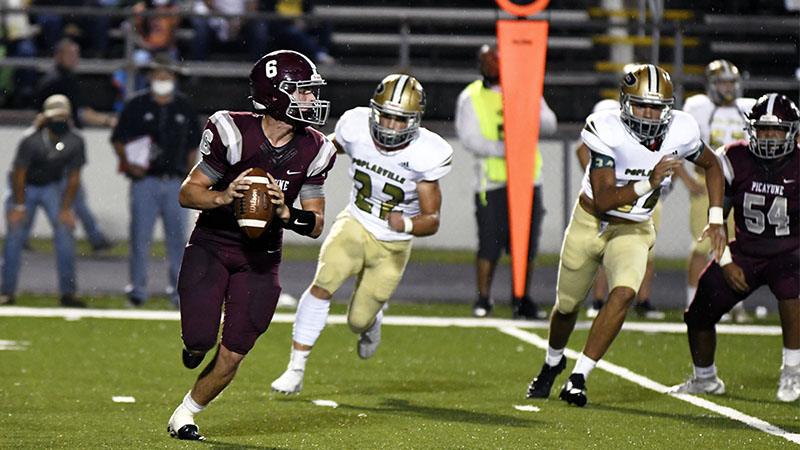 On The Run: Picayune quarterback Isaac Hickman rolls out to his right as Poplarville linebacker Mark Will looks to chase him down from behind. Photo by Jonathan Mitchell

The Picayune Maroon Tide and Poplarville Hornets football teams met Friday night in a battle of two Pearl River County rivals with the Maroon Tide coming away with a 31-21 win.

It was a tale of two halves with the teams trading touchdowns in the first half, only for each team’s defense to lock things down in the final two quarters

It took less than three minutes to start the scoring as Picayune drove down the field on its opening possession and finished off the drive with a 6-yard touchdown run from full back Darnell Smith.

Kicker Morgan Craft put the PAT through the uprights, giving Picayune the lead at 7-0.

Poplarville had an immediate answer however and scored on the following possession as running back Greg Swann broke off a huge 53-yard touchdown run.

Zach Carpenter fell short of the extra point, so Picayune maintained a 7-6 lead.

The scoring continued on the next possession as running back Dorian Robinson finished off a 65-yard drive by Picayune with a 27-yard touchdown scamper.

Craft’s extra point was good, and Picayune had a 14-6 lead with 4:23 still left in the first quarter.

Poplarville and Picayune traded possessions until 9:03 in the second quarter when full back Payton Waddell took the ball in from the 6-yard line for Picayune.

Following the PAT from Craft, Picayune was up 21-6.

However, the Hornets weren’t going to let the Maroon Tide run away with the game, and responded on the next possession with a scoring drive of their own. Quarterback Matt Will took the ball up the gut and scored on a QB sneak from the 2-yard line.

This time kicker Preston Stuart came on for the extra point and put it through the uprights to cut into Picayune’s lead 21-13.

Picayune got the ball back with only 12 seconds to go before halftime, but a long pass from quarterback Isaac Hickman to wide receiver Jashawn Lee took the Maroon Tide down to the Poplarville 17 with 4 seconds left in the half.

Head Coach Cody Stogner sent out Craft and the field goal unit, and his decision paid off as Craft split the uprights to give the Maroon Tide a 24-13 lead heading into halftime.

The second half saw both defenses tighten things up and neither offense could find any rhythm to start the third quarter.

There would finally be a break through with just over 7 minutes remaining in the fourth quarter when Picayune running back Austin Samples scampered into the end zone from 2-yards out.

Following the extra point from Craft, Picayune had a 31-13 lead that lasted until the final moments of the game.

The Maroon Tide’s defense came up big in the second half with several key stops, but Poplarville found the end zone for the last time of the game when Will scored on a 1-yard touchdown run.

The two-point conversion to running back Maurice Travis was good, so Poplarville was down 31-21 with just 1:16 left on the clock.

Stuart tried the onside kick, but Hickman recovered the ball for Picayune, which lead to the Maroon Tide running out the clock to win the game.

After the victory Stogner praised his team’s ability to battle with the well-coached and talented Poplarville team.

“It was a war out there and it’ll be the same next week. We have to limit our mistakes and work towards being perfect. (The players) answered the call for 48 minutes,” Stogner said.

Poplarville Head Coach Jay Beech lamented his players’ mistakes in key situations that hindered the team’s ability to come out with a win.

The Pearl River Central Blue Devils also had a game last night when they traveled to Gulfport to take on the Admirals, but ended up losing 42-14.