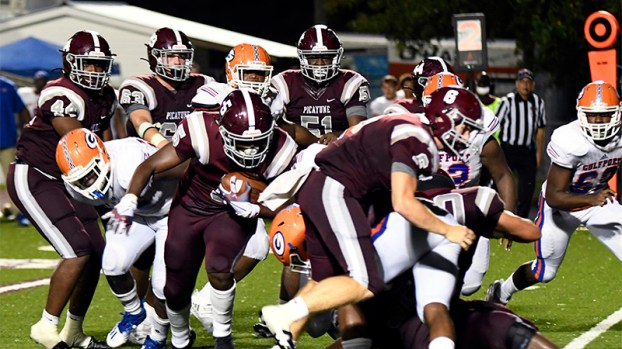 Push Through: Running back Dorian Robinson runs through an attempted tackle as he fights for extra yards. Photo by Jonathan Mitchell.

The Picayune Maroon Tide is 2-0 on the season as the team begins preparations for its upcoming opponent this week, the Poplarville Hornets.

Picayune is coming off a high scoring performance against Gulfport last week with the Maroon Tide pulling out a 41-34 win.

Now it’s a new week with a new adversary.

Offensively the team will be looking to build off of the Gulfport performance.

“No matter how many points you score, or how many yards gained, there’s always room for improvement. We need to continue to get better and strive for perfection. That goal is never attainable, but when you strive for it you tend to play up to a higher standard,” Head Coach Cody Stogner said.

There were a few defensive miscues for the Maroon Tide against Gulfport.

The hope is to clean those up and continue to rise to the occasion after the unit made some huge stops late in the game last Friday night.

“There’s still a lot of young guys, it’s only game two and (Gulfport’s players) were very athletic on offense, but (our guys) did well enough to win the game. The big stops were game changers,” Stogner said.

Stogner knows the tradition and talent level that awaits his team this Friday when the Hornets come to town.

Poplarville may be 0-2 right now, but they’re still a dangerous opponent.

The players know they’ll have to play as close to a perfect game as possible to earn the win.

“Right now our goal is to beat Poplarville and that’s the only goal this week. When you start looking ahead that’s when you get beat. We’re playing a very good Poplarville team. We’ll have to match their intensity, match their effort and match their execution,” Stogner said.

Picayune’s athletes strive to improve every week as the team chases another shot at the 5A state championship.

Stogner said all of the preparation for Poplarville would hopefully lead to a well rounded performance this week.

“Are we getting 1 percent better than we did the day before? Did we get better from last week’s game? That’s what we look for,” Stogner said.

Because of the shortened season this year due to COVID-19, district play is already fast approaching.

The first few games of the season help Stogner and his staff not only evaluate each player’s conditioning, but also the athlete’s innate knowledge of the team’s systems.

“You can’t mimic game speed in practice. These games are important not just for getting in shape playing wise, but also teaching wise because now everything is moving faster. We’re able to teach a lot better off of these early games,” Stogner said.

The game against Poplarville will start at 7 p.m.