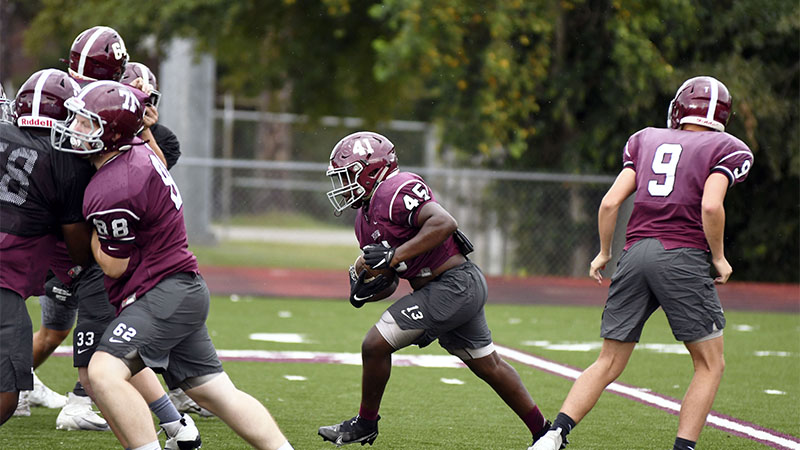 Tough Yards: A Picayune running back takes a hand off and heads into the center of the offensive line during a recent practice. Photo by Jonathan Mitchell.

The Picayune Maroon Tide is riding high after a season opening victory over Meridian as the players and coaches now begin preparing for this week’s matchup against the Gulfport Admirals.

The Admirals started their season with a brutal 52-29 loss to Oak Grove and now will have to travel to Lee-Triplett Stadium to take on Picayune.

The Maroon Tide had some miscues offensively last week, but 30 points and over 400 yards of total offense means things are already clicking for Picayune.

The game against Gulfport will be quarterback Isaac Hickman’s second game as the starter for the Maroon Tide and Head Coach Cody Stogner said Hickam serves as a model player for the program as the Maroon Tide looks to move to 2-0 on the season.

“He’s a tremendous leader and a great football player. He’s an example of what we preach in our program about being tough and giving your best effort. He’s our leader and we expect great things from him this year,” Stogner said.

Stogner said that while the team had 6 turnovers against Meridian, that won’t do against Gulfport.

“We were our own worst enemy last Friday night, but the kids found away to win and that’s the most important thing. Now we’re working on getting in better shape, being more precise and taking care of the football,” Stogner said.

The uncertain nature of the season’s start due to COVID-19 means the players and coaches are relishing every opportunity they get to be on the field.

There are states without football this fall, which is a fact Stogner said isn’t lost on his athletes.

This Friday night matchup will be the first home game of the season for Picayune, and even though it’ll look different because of COVID-19 restrictions and protocols, the Maroon Tide is excited to bring football back to the community.

“When you play in front of a home crowd there’s always a different feeling about it, but I believe our kids don’t care where they play as long as they get to play. We’re just working extra hard to give (the fans) the quality football they’re always used to seeing,” Stogner said.

The matchup against Gulfport is slated for Sept. 11 and will start at 7 p.m.