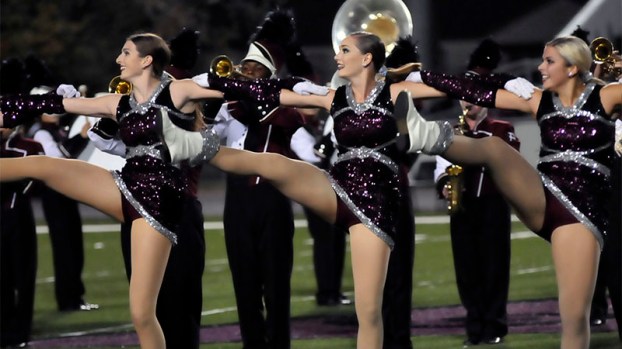 Keeping Tradition: The Pride of the Tide still performs the crowd favorite, "Are you from Dixie?" routine at each home football game, keeping the tradition alive in an non-traditional year. File photo by Jonathan Mitchell.

Picayune Pride of the Tide adapting to new routines

Members of Picayune’s Pride of the Tide were relocated from their normal spot in the stands for Friday night games due to COVID-19, but the dancers are making due with the that change and other restrictions affecting halftime performances.

Dancers now sit in a separate set of bleachers located behind the end zone, along with the band and color guard.

The new location takes the group further away from the fans, but allows for social distancing amongst the dancers.

Pride of the Tide has only performed twice this season because they’re no longer allowed to travel with the football team to away games due to the Mississippi High School Activities Association’s COVID-19 restrictions.

Assistant Director Sarah Arthur said the restrictions have played a part in the dancers’ performances so far this year.

“Everything has been moved around so much because of COVID and we’ve been working on the field show so much that we kind of put our kick routine on the backburner. We learned from that experience, fixed some stuff and practiced a lot harder,” Arthur said.

The new location away from the fans isn’t ideal for the dancers as they try to interact and inspire the crowd to cheer on the competing football players.

However, it’s the new normal for the Pride of the Tide and Arthur said the athletes are taking the changes in stride.

“I think they’ve definitely had to accept the reality of the situation. I think the attitude of the girls and of the band has been good by just taking it as it is and understanding why things are the way they are. Overall I think the girls have adapted and I haven’t heard a single complaint. There’s been a good energy surrounding that area even if that’s not what they’re used to,” Arthur said.

Because of practice limitations and a shorter band camp, Arthur said the dancers aren’t quite as polished as they’d normally be.

The focus has been on the field show and getting that nailed down, but pandemic limitations caused the dancers to work harder to make up for lost time.

Still, Arthur said that following the Pride of the Tide’s first two performances the group is on the right track, even with the obstacles in the way.

While it originally looked like there wouldn’t be any dance competitions this year due to the pandemic, Arthur said the program received information Monday that there may still be a competition in December depending on how things progress.

“We are looking forwarded to registering for that and hopefully to have in-person competition this winter,” Arthur said.

The Pride of the Tide’s next performance will be this Friday during the Maroon Tide football game halftime intermission.

The Picayune color guard has had to deal with a variety of changes due to COVID-19 restrictions, but those obstacles... read more