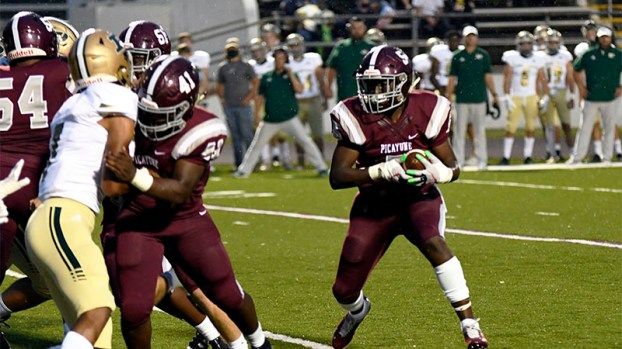 Sealed Edge: Running back Dorian Robinson looks for a running lane as full back Darnell Smith blocks for him. Photo by Jonathan Mitchell.

Picayune looks to earn a district win against East Central

The Picayune Maroon Tide is coming off a hard fought 31-21 victory over rival Poplarville last week.

Last week’s performance saw the Maroon Tide improve to 3-0 on the season and that perfect record will be on the line against the Hornets.

“I thought we executed our game plan well. We only hurt ourselves on offense when we got behind the chains, so we had to battle through that adversity. Overall we played a good game,” Head Coach Cody Stogner said.

The physical nature of the matchup against Poplarville will likely be replicated this week against East Central.

However, that physical style of play isn’t something Stogner or his team shy away from. In fact, it’s what the Maroon Tide prides itself on.

“That’s our goal, to be more physical than everybody we play. That’s our philosophy is that we’re going to be physical and tough,” Stogner said. Picayune has also used its athletes’ competitiveness and unselfishness to its advantage by having numerous players see significant time on both sides of the ball.

The players are interchangeable and capable of playing multiple positions, which means Picayune can adapt its line up depending on the opponent.

Isaac Hickman is the team’s starting quarterback and spends time at linebacker, but Stogner said Hickman is one of many players willing to do whatever is needed from them in order for the team to succeed. “He’s not the only one, we’ve got a couple other guys filling in multiple roles. That’s our team right now, our identity. Our willingness to win is where we need it to be,” Stogner said.

This week will include another series of drills and film sessions focused on self-improvement.

Opponents change on a weekly basis, but the focus remains the same for the Maroon Tide.

Each week is about getting better, inch-by-inch, and focusing on self-evaluation.

“We’re going to work on us. Whether it’s executing on offensive and defensive fronts, lining up correctly or doing our assignments. We’re going to strive for perfection,” Stogner said.

The game against East Central will be Picayune’s first district matchup of the year, which means a win could see the Maroon Tide take its first step towards a postseason opportunity.

Picayune has had three games to iron out the kinks, and now the Maroon Tide’s mettle will be put to the test.

“This is what we prepared for these past three games. We want to win them all, but we’re going to focus on one game at a time. If our players take coaching well, play with their best effort and do their jobs I really like our chances on Friday nights,” Stogner said. The game will be at home Friday night for Picayune and is scheduled to begin at 7 p.m.

PRC hopes to start off district play with a win

The Pearl River Central Blue Devils are coming off a 42-14 loss to the Gulfport Admirals last week and now... read more