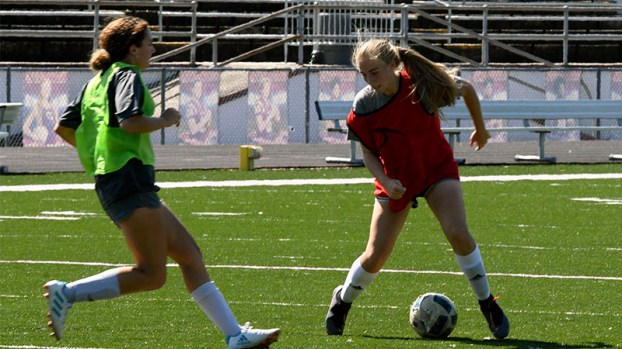 Getting experience on the field can help a player’s growth and for the Picayune Lady Maroon Tide soccer team this year’s roster has plenty of tested players.

There are only two seniors on the team, but the younger players have been a part of the varsity program since seventh and eighth grade.

The extra game time and maturity of the athletes means Head Coach Ed Williams is hopeful of a strong showing from his team this season.

“I think there’s a maturity level that’s developing in the team and they hold themselves to a certain standard. When that takes place we can start to turn corners, and I think this season might be the season we actually do that because of personal responsibility,” Williams said.

The team has slowly ramped up the intensity in practices while also adding in technical elements of the game as well.

Once the players are in shape and have knocked off any rust the emphasis then shifts to more team based workouts.

Watching film from last year’s games to dissect those performances is used to evaluate where the players need to improve.

It’s a lot to take in, especially for some of the younger athletes, but Williams said it’s a necessary obstacle the athletes have to overcome.

“I emphasized to the girls that with COVID and (possible) injuries everybody on the (16 person) roster will be called on to have time on the field. The younger players are having to work harder than before, and I’ve been pushing them a little bit harder than last season to get them hopefully game ready,” Williams said.

The film sessions are especially important in educating the players on what changes need to be made before the start of the season.

After having a couple of months off, the players are able to look at the tape with a new perspective, which allows them to better understand Williams’ instructions as their knowledge of the game grows.

“We were going through videos from last season and it was interesting how they saw themselves and evaluated themselves. They would say, ‘I see now what you’re saying about not doing this, or needing to do this.’ I was really pleased. They weren’t critical, but they were aware of the things they needed to improve on,” Williams said.

The season is just over a month away and the clock is ticking as the players prepare themselves for the first game of the year.

Williams said the program is moving forward in a positive direction, but that the practices will need to maintain the same level of competition as the first game draws closer.

“The past few weeks we have had really good practices. They’ve gotten better with the intensity and doing what I’m asking them to do,” Williams said.