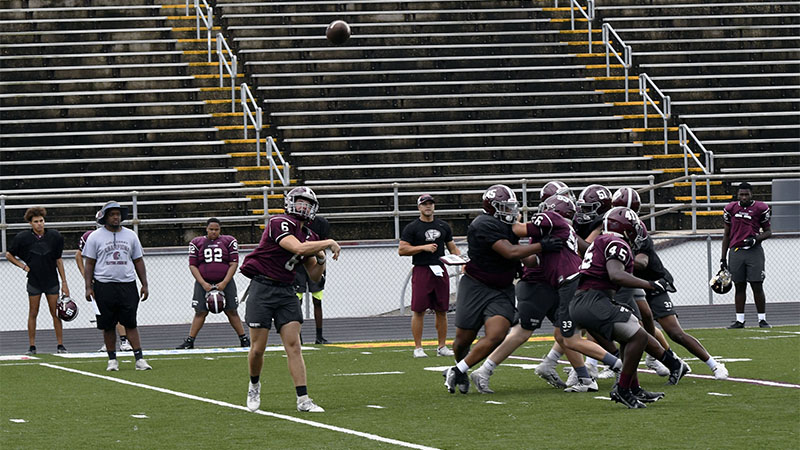 Short Drop: Quarterback Isaac Hickman sits in the pocket and throws to the sideline during a recent Maroon Tide practice. Photo by Jonathan Mitchell.

It was the first game of the season for the Maroon Tide following a two-week delay in competition due to COVID-19.

The victory was also the first for new Head Coach Cody Stogner, who took over the position following the retirement of Dodd Lee after the conclusion of the previous season.

Stogner said there was some sloppiness he’s hoping will get cleaned up this week, but at the end of the day a win is a win.

“We were lucky to come together with a win, but regardless of the other stuff that happened we found a way,” Stogner said.

Picayune was an offensive juggernaut last season and looks to replicate that success this year with a new backfield. Senior running back Austin Samples led the Maroon Tide with 157 yards rushing on 15 carries, while also scoring two touchdowns.

Sophomore running Dante Dowdell was another dangerous weapon for Picayune against Meridian as the youngster racked up 115 yards and a touchdown on just nine carries.

Senior quarterback Isaac Hickman got in on the scoring action as well with a 2-yard touchdown run to go along with 53 yards passing and an interception while going 2 for 6 through the air as the Maroon Tide’s dangerous offense took control.

“Of course there were first game jitters, first game rust, but once we got in the groove we were playing Picayune football. It just took us awhile,” Stogner said.

Kicker Morgan Craft was clinical for Picayune as he went 4 for 4 on extra points. Stogner said the freshman’s calm demeanor was a surprise given the environment he’d been thrown into.

“Being a freshman you never know how he’s going to react once we got into the game. But he’s a mature player he went out there… and did exactly what we asked him to do. I was really impressed with him,” Stogner said.