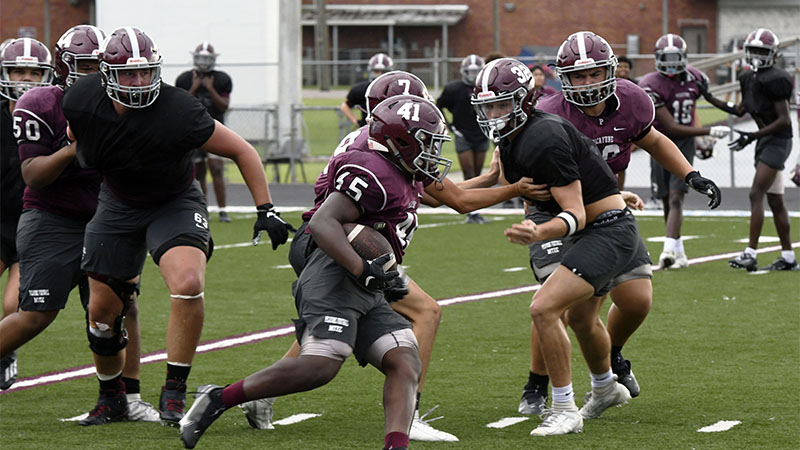 Make Them Miss: Full back Darnell Smith takes a hand off and heads up field. Photo by Jonathan Mitchell.

The Picayune Maroon Tide football team hasn’t had any competitive action since last year’s 5A state championship game, but that’ll change this week when the Maroon Tide takes on the Meridian Wildcats Friday night.

Picayune, like other football programs across the state, lost out on spring practice because of COVID-19.

Instead, the program has had to focus to make the most out of summer practices and the fall preseason to get ready for its away match up with Meridian.

Padded practices started just a couple weeks ago for the Maroon Tide, and Head Coach Cody Stogner said his staff has used the physical practices to determine which players will have a large role once the season begins.

“It’s always good to get into the pads and get that soreness out. The other good thing about it is we’ll find out who wants to block and who wants to tackle,” Stogner said.

The contact practices allow the athletes to once again acclimate their bodies to the rough nature of football, while also helping Stogner and his staff mold the team’s identity into what they want it to be.

Picayune is known for its physical run game, and Stogner said the practices leading up to the first game have been about reestablishing that identity.

“The first few weeks we’ve been focusing on us getting to know what this team’s identity is. We want to develop a little more toughness out of the newer guys and younger kids, but the older guys know what to expect on the field,” Stogner said.

Aside from getting the players used to the physical nature of football once again, Stogner has had to make sure his athletes are conditioned enough to compete for a full game.

Since this will be the first competitive action for Picayune in some time, fatigue could creep in as the game goes on.

The game against Meridian has everyone in the program excited.

After seeing how COVID-19 led to the cancellation of spring sports entirely, the football players and coaches are thankful they get to take the field Friday night against the Wildcats.

“They’ve taken it to heart and they’ve seen it with spring sports so they know it can happen, it’s not a fairy tale. Everybody is so excited because football season is here and about to get started,” Stogner said.

The game, which will take place at Meridian, is set to begin at 7 p.m.