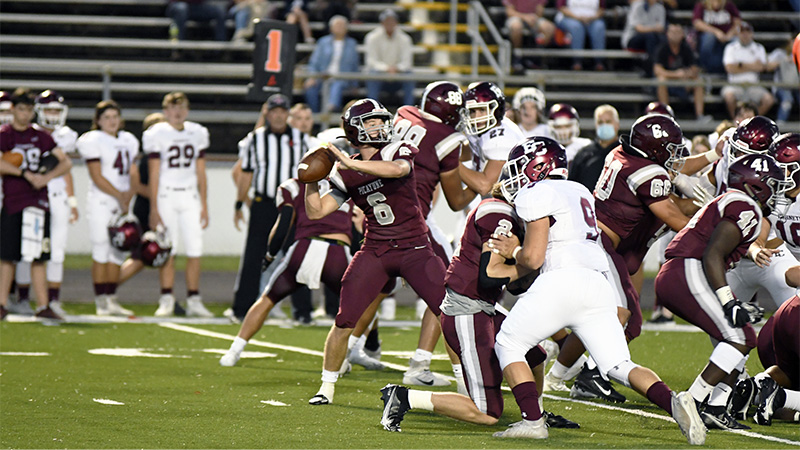 In The Pocket: Quarterback Isaac Hickman drops back to pass as running back Austin Samples provides pass protection. Hickman had a 2-yard touchdown run for Picayune against East Central that ended up being the winning score. Photo by Jonathan Mitchell.

The Picayune Maroon Tide and East Central Hornets faced off in a defensive slugfest Friday evening with Picayune emerging victorious 14-7.

Both team’s defenses were flying off the ball and aggressive from the start.

Quarterback Deuce Hugger led the Hornets offensively, but couldn’t get much going against the stout Picayune defense.

Neither team started well offensively until the middle of the second quarter when East Central finally broke the deadlock.

Wide receiver Cayden Fant took a double reverse to the house from 70-yards out to start the night’s scoring.

Kicker Tyler Farris came on for the extra point and put it through the uprights, which had the Hornets leading 7-0 with 7:29 left in the second quarter.

Quarterback Isaac Hickman and the Maroon Tide offense tried responding, but the Hornets defense was up to the task and prevented a Picayune score.

East Central went into halftime leading Picayune 7-0. The second half started with renewed energy on the Picayune sideline.

The Maroon Tide came out on the first possession of the second half and drove the ball 70 yards in just over four minutes to tie the game up.

Senior full back Mitch Harper ended up capping off the drive with a 26-yard touchdown run.

Morgan Craft came on to kick the extra point for Picayune and it split the uprights.

The game was now tied 7-7 with plenty of time left on the clock.

East Central and Picayune traded possessions trying to find a crack, and eventually it was Picayune that struck again.

A drive that started at the Maroon Tide 36-yard line finished with Hickman taking the ball up the middle on a quarterback sneak from 2-yards out to score Picayune’s second touchdown of the night.

Craft’s extra point was good, which saw Picayune go up by seven with just 9:44 left in the game.

East Central needed to score a touchdown and ended up getting inside the Picayune 5-yard line with under three minutes to play.

However, the Maroon Tide defense came up big and forced a fumble that was recovered by Hickman at his linebacker position on the Picayune 2-yard line.

Picayune needed to run out the clock to secure the win, but East Central wasn’t going down without a fight.

Picayune had a third and 9 situation from their own 2-yard line with the game on the line. If they got a first down it was game over, but if not they’d have to punt the ball back to the Hornets with time still on the clock.

In a gutsy play call, Picayune decided to pass for the first and Hickman connected with tight end Trey Dorsett for 26-yards to seal the 14-7 win.

Head Coach Cody Stogner said his team fought through adversity to win the game, especially after a tough first half. “They were more physical than us in the first half but we went in at halftime and I asked my guys if they still believed they could win the game, and they answered (in the second half). I’m so proud of my guys,” Stogner said. The win saw Picayune move to 4-0 on the season and 1-0 in district play.

Next week the Maroon Tide travels to Gautier to take on the Gators. The Oct. 2 game will kickoff at 7 p.m.