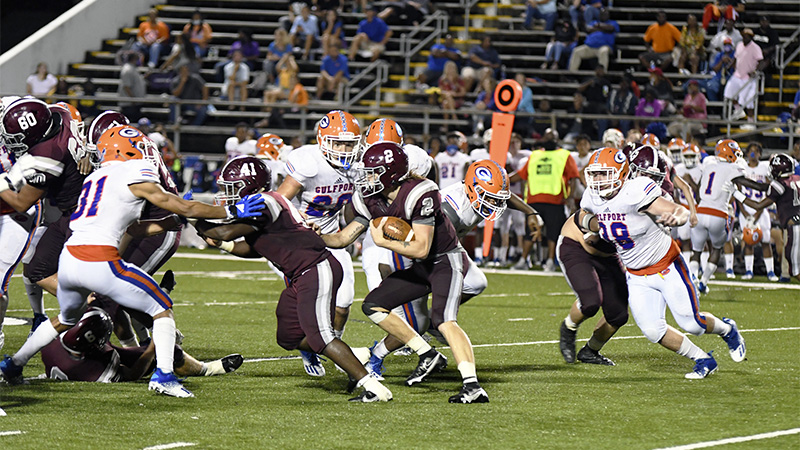 Picayune started the scoring with 5:19 left in the first quarter when running back Austin Samples finished off the drive with a 2-yard touchdown run.

Morgan Craft’s extra point was good and the Maroon Tide took a 7-0 lead.

Picayune doubled its lead two minutes into the second quarter after Samples found the end zone for the second time on the night.

The PAT split the uprights putting Picayune up 14-0.

Later in the quarter the Maroon Tide capitalized on a special teams miscue from the Admirals as tight end Nick Doane caught a botched punt and took it into the end zone, which after a missed PAT, saw the Maroon Tide go 20 points clear.

However, Gulfport started to claw back after an 8-yard touchdown run from running back Tiwan Cherichel.

The scoring drive was copied by Picayune who marched down the field and Samples got his third touchdown run of the evening to put Picayune up 27-6 with 2:48 left in the first half.

A quick touchdown pass from Gulfport’s quarterback Breck Leflore to wide receiver Lushawn Griffin just before the half saw the teams enter the locker room with Picayune leading 27-13.

The two teams traded possessions until the Admirals scored on an 85-yard touchdown pass from Leflore to wide receiver Zayshun Crawford that cut Picayune’s lead to seven with plenty of game left.

Picayune need for a response was answered by senior quarterback Isaac Hickman who scored on a 1-yard touchdown run to put the Maroon Tide up 34-20 with 1:13 left in the third quarter.

The Admirals didn’t fall easy, and after receiving possession of the ball, marched down the field and scored on a 2-yard scamper from running back Tyler Reed.

After the PAT from Tres Ladner Gulfport was once again within seven points of Picayune.

The Maroon Tide then went on a four minute drive and scored when full back Darnell Smith bullied his way into the end zone from 9-yards out to give Picayune a 41-27 lead with 6:42 left in the game.

Gulfport needed to score quickly, and did so on another touchdown pass from Leflore, this time to wide receiver Nehemiah Jefferson.

The extra point was good, the Admirals needed a successful onside kick to dream of tying up the game from the current 41-34 score.

Ladner lined it up on the kickoff, allowing the Admirals to recover the kick after a scramble for the ball.

However, the Maroon Tide defense answered the call and forced a turnover on downs so Picayune could earn the 41-34 victory and move to 2-0 on the season.

After the game Head Coach Cody Stogner said he was happy with his player’s tenacity and perseverance against the Admirals. “We did a great job of finding a way to win. We’re going to be great we just need to work on us, and (everyone) do their job. We fought hard for 48 minutes and that’s what it’s going to take all year,” Stogner said.

In other scores from around Pearl River County the Poplarville Hornets lost to the D’Iberville Warriors 21-14.

Picayune’s next game will be at home Sept. 18 against the Hornets.