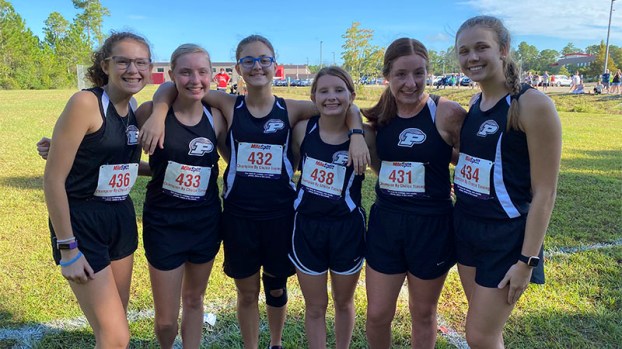 Head Coach Chris Wise said his team as a unit is well rounded and more competitive this year than in years past and the results have mirrored Wise’s sentiments.

“This team is stronger top to bottom than it ever has been before. As a coach you want to see all your jerseys coming in at the same time,” Wise said.

The high finishes and low times are indicative of a hard working team with the athletes reaping the benefits of the training that’s been ongoing since mid summer.

“The work ethic has been great. They’ve been working their tails off. There are no complainers, just a bunch of kids with good work ethics trying hard and getting better every time,” Wise said.

The team had originally planned on competing again just two days after the Biloxi Invitational, but Hurricane Sally altered those plans.

The team will take part in a fundraiser 5k this weekend for the Picayune cheerleaders, then will use the following week to recover from injuries and recuperate. That means there will be a period of over two weeks in between competitive meets for the Maroon Tide, which is a double-edged sword.

Wise said the recovery aspect of having a week without a meet is good, but because of the inexperience of some of his athletes it was imperative the team race as often as possible this season before the regional meet.

Racing requires a specific pacing strategy so an athlete can finish the race strong.

Experience helps runners determine that pace, and the fewer number of races this season means Wise is hoping his athletes are quick learners.

“You do need to start off fast because you don’t want to be too far behind, then accelerate in the middle and accelerate really hard at the end. They need to pace themselves a little bit better. I’m hoping my athletes will continue to improve throughout the season,” Wise said.

The team’s next competitive race following the fundraiser 5K will be the Admiral Sand Dash in Gulfport on Oct. 1.

Every year members of the Pearl River County 4H Club make a record book to document the year’s events. This... read more