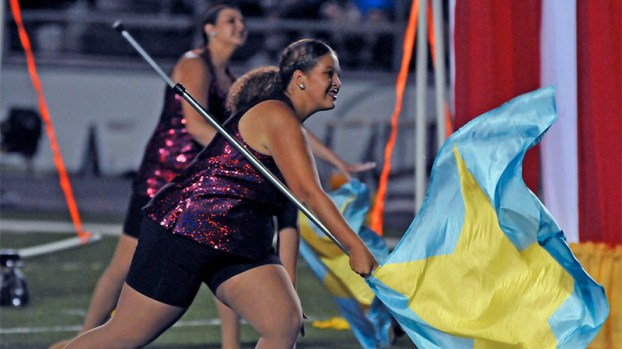 New Routines: On top of the normal flag routines the color guard has done in the past, this year members have to learn how to do a rifle routine as well. File photo by Jonathan Mitchell.

The Picayune Color Guard has had to make due with altered practice schedules and new routines because of COVID-19, but all the work will soon pay off when the group performs for the first time.

Director Jessica Malley said that because of her group’s relative inexperience, fundamentals have been a point of emphasis during practices.

“Their fundamental skills have grown immensely. They performed ‘Are you from Dixie?’ just about flawlessly at Meet the Tide. They’re learning to work together as team,” Malley said.

Because of COVID-19 restrictions the color guard won’t be traveling with the Maroon Tide football team this Friday when it takes on the Meridian Wildcats.

The extra week will give the group more time to memorize the necessary routines before their first Friday night performance on Sept. 11.

“We’re moving as quickly as we can with COVID-19 restrictions and the weather. It has been raining a lot and that’s hindering progress,” Malley said.

Seeing as there are several new members on the squad, Malley said there have been some nerves in regards to the group’s first show.

Members have to learn a rifle routine, which has returned after a two-year hiatus and as such is unfamiliar to the majority of the group.

That new wrinkle along with everything else happening means it’s fallen on the veteran members to keep the younger ones calm.

“The older members have definitely been encouraging the new members. They’ve really been trying to prepare mentally and prepare for what we’re expecting to see on the field,” Malley said.

The color guard will have their own set of bleachers placed in the end zone within Lee-Triplett Stadium this year. The move was made in order to give more of the bleacher space to fans so they can observe social distancing while watching the game.

All of the changes that have come with COVID-19 may have left the color guard in unfamiliar territory, but Malley said at the end of the day her pupils are excited just to have the opportunity to perform once again.

“They just can’t wait. They’re just excited to have a chance to step on the field this year,” Malley said.

For the month of August the number of attendees at high school sporting events was limited to just two fans... read more