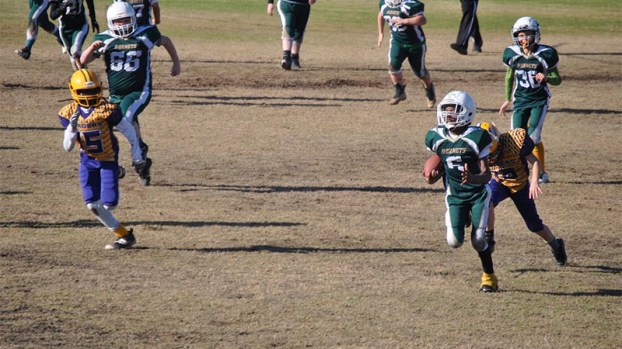 Season Is On: The PAA football season will take place this year with games starting Sept. 19.

PAA Football moving ahead with seasons for older players

The Poplarville Athletic Association is going to have a fall football season, although it’ll look a little different this year with COVID-19 affecting the league.

PAA Secretary Martin Walker said that approximately 65 players signed up along with 13 cheerleaders, which is down from the numbers last year that included 90 athletes and 17 cheerleaders.

Because of the lower numbers the youngest age group that would normally play, the 5 and 6-year-old teams, won’t have a season.

Players in that age range were given the option to either move up and play on the 7 and 8-year-old team, or given a refund due to the cancelled season.

Previously, the teams would have a home game and an away game for each opponent so that travel was spread evenly amongst the teams.

However, because facilities at Poplarville High School won’t be open to outside organizations, the PAA doesn’t have a field to play on, which means all of the games will be away.

Although there is still some hope that other options may save the teams from having to travel each week.

“Once our schedule is made we’re going to try to get in touch with PRCC to see if they’d let us use their facility,” Walker said.

The organization will adhere to all COVID-19 guidelines in place when it comes to sports and athletic events.

Originally the PAA was only going to allow two fans to attend per participant, but with the amended restrictions more spectators will be allowed to enjoy the games.

“It’s a nice thing to avoid because some people have a mom, dad, brothers and sisters so two people per kid would be difficult,” Walker said.

The current plan is to have jamboree games on Sept. 12, with games starting the following weekend. Walker said the overall attitude of parents and players participating in the season has been positive.

There was a lot of uncertainty on whether or not the season would even happen, and now that the ball is rolling the excitement is building, even as some athletes miss out on the chance to play because of the low numbers. “The ones getting to play are excited to get out of the house and are ready to play, but I know some of the kids who are stepping away because the age group wasn’t happening were heartbroken, which didn’t feel good for us,” Walker said.

The Poplarville boys and girls cross country programs held tryouts this past week for interested athletes, and will now move... read more