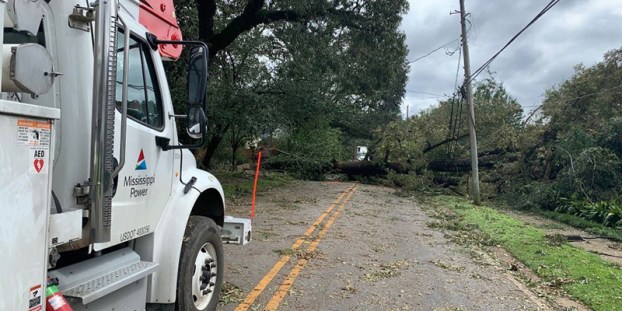 Coast Electric and Mississippi Power sent crews to Alabama on Thursday to help with recovery efforts as part of the damage caused by Hurricane Sally.

Coast Electric sent 37 crewmembers from Pearl River, Hancock and Harrison Counties to Baldwin County, Ala., to help the Baldwin Electric Membership Cooperative get the lights back on, said Director of Communications April Lollar. The crews included linemen, servicemen, an engineer and mechanics.

As of Thursday, 78,000 members in the Baldwin co-op were without service due to the storm. Coast Electric’s crews will be on a 10 day rotation helping with power restoration. If Baldwin EMC still needs assistance after those 10 days, Coast Electric will send another crew, said Lollar.

“They took on so much damage,” she said. “Their system is very similar to ours. They serve an area very much like ours.”

“We have seven principles that guide us and one of them is cooperation among cooperatives…We do it for any co-op that calls and needs help, but with Baldwin it’s almost closer to a family relationship because we’ve helped them in the past and they’ve helped us in the past,” she said.

Typically the network of co-ops send crews to areas closer by, which for Coast Electric means neighboring states like Alabama, Louisiana and Florida, but after Hurricane Katrina, crews from as far away as Canada came to offer assistance in Mississippi, said Lollar.

Mississippi Power sent a team of 100 linemen and support personnel to Mobile, Ala., Thursday morning to help its sister company Alabama Power with storm recovery, said spokesperson Jeff Shepard. Both Mississippi Power and Alabama Power are owned by the Southern Company. The team arrived safely, had a safety briefing and was able to start work by Thursday afternoon.

Mississippi Power participates in a mutual assistance program through the Southeastern Electric Exchange, and in the last six weeks has sent crews to New York City, Philadelphia and Lake Charles to support utility companies that needed extra resources after a natural disaster, said Shepard.

As storms approach the east coast or the Gulf of Mexico, utility companies with coverage areas in the path of a storm put out calls for additional resources, said Shepard. On Monday, Mississippi Power had secured 1,000 additional personnel. By Tuesday, they’d released some as the storm shifted east, and they knew less of their service area would be impacted.

“That’s one thing that the utility industry does very well, is be proactive and plan ahead for disasters like this. We understand getting the lights back on is part of getting back to normal,” said Shepard.

Country music trio Chapel Hart writes music inspired by their life experiences, which include growing up together in Poplarville. Their... read more