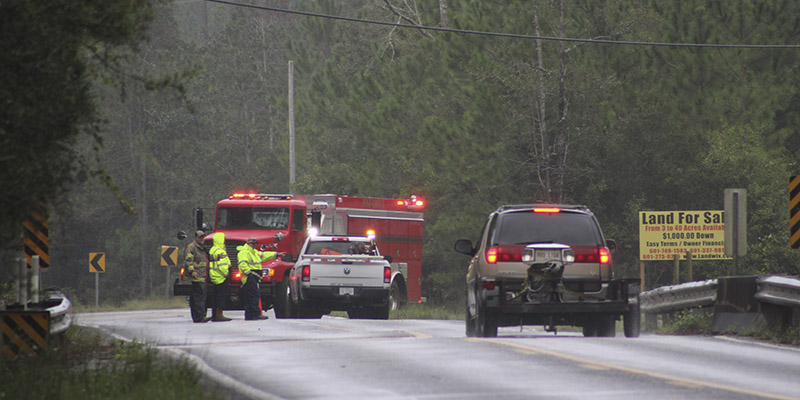 safety first: Monday morning, traffic was redirected to detour on Rock Ranch Road away from Highway 43 North after a car accident on the highway damaged several power poles.

No one was injured in a car accident that downed three power poles Monday morning.

At approximately 5:30 a.m. a vehicle traveling south on Highway 43 North near George Wise Road went off the roadway and struck a power pole, said Mississippi Highway Patrol Trooper Cal Robertson. The pole broke and forced the power lines to hang low over the roadway.

Then a northbound vehicle struck the low hanging power line and also went off the roadway, said Robertson.

No one was injured.

The weight of the first downed pole cause two others to also break, said Coast Electric Director of Communications April Lollar, leaving 178 members without service. The power outage lasted from 5:29 a.m. to 10:43 a.m.

Lollar said that another accident where a vehicle hit a power pole occurred in Harrison County on Sunday.

“With wet roads we just want people to be careful, because it’s dangerous not only for the people in the wreck, but for others and for crews as well,” she said.

Drivers should give crews plenty of space to do their repair work when power lines need to be repaired, she said.

When someone sees a downed line, if there is immediate danger always call 911 first and dispatchers will notify the electric company as well. People can also call and report a downed line to the power company, Lollar said, but if they call after hours, they would typically need to leave a message.

“Especially if folks are in a wreck like that, I’d start with 911 and of course never ever go near it. Never touch a downed power line. Even in an instance where you think a line might be de-energized.”

If someone has a generator and hooks it incorrectly to their home during a power outage, it can back feed, creating a possibility where a line stays energized when crews think it should be de-energized, she said. If someone sees a downed power line they should report it and stay away from it.