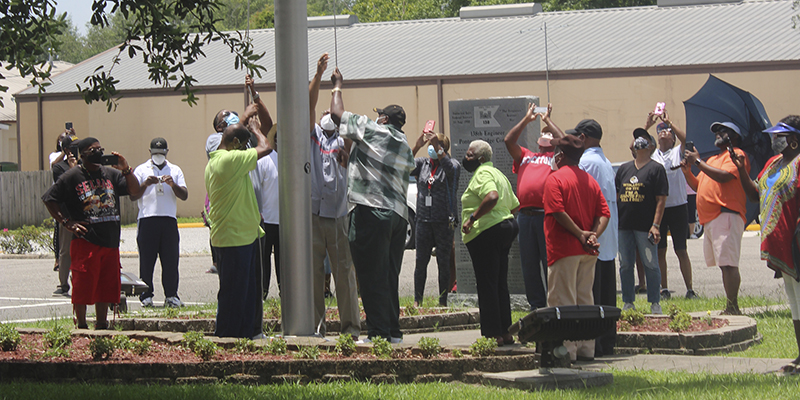 No longer on display: Elected officials and community members gathered at the flag pole near City Hall in Picayune to remove the state flag back in June. A replacement for that flag is on the ballot for the General Election set in November. File photo by Cathy Cook | Picayune Item

The upcoming General Election has three major measures on the ballot that will affect the entire state of Mississippi, including a change to the way statewide officials are elected, a proposed new state flag and confusing wording concerning whether to legalize medical marijuana.

Currently in Mississippi, a candidate can win the majority of the popular vote in a statewide election and not be elected into office, but voters will have an opportunity to decide if that should change during November’s election.

The Jim-Crow era provision was enacted during the 1890 Constitutional Convention.

The judge in the case declined to make a decision on the issue unless the provision was triggered by the 2019 elections, which it was not. He then postponed the case so that the Legislature could consider repealing the provision in 2020.

The Legislature passed a resolution in June that would remove the electoral requirement from the state constitution. The proposed constitutional amendment also adds that if a candidate does not receive a majority vote in a race for governor or other statewide offices, the top two candidates would proceed to a runoff election.

Mississippians will be able to vote to accept or reject the constitutional amendment in November.

There are two other statewide ballot measures up for consideration in November: legalizing medical marijuana and the proposed design for the new state flag.

Wilkes said she was concerned that the name of the flag design, the “In God We Trust Flag,” could create confusion. The Legislature required by law that any new flag design will include the words, “In God we trust.”

The ballot measure focused on medical marijuana is more complex than a simple “yes” or “no” and contains options that look similar on the ballot, but will have different outcomes if approved. Voters will have two questions to answer on the measure.

Initiative 65 would allow doctors to prescribe medical marijuana for over 20 conditions, and sets a limit on the amount someone could possess at up to 2.5 ounces of medical marijuana. It also outlines the cost for medical marijuana patient ID cards, the administering agency, the deadline for cards to be issued and prohibits smoking marijuana in a public place.

Alternative No. 65A is the Legislative alternative. It does not specify possession limits, tax rates or the administering agency for medical marijuana, leaving the Legislature to set those details instead of placing them in the state constitution. The alternative measure would also limit access to medical marijuana to people who have been diagnosed with a terminal or debilitating medical condition and limits the number of state licensed manufacturers who could produce and sell marijuana products.