Football games to look different for the Picayune Maroon Tide 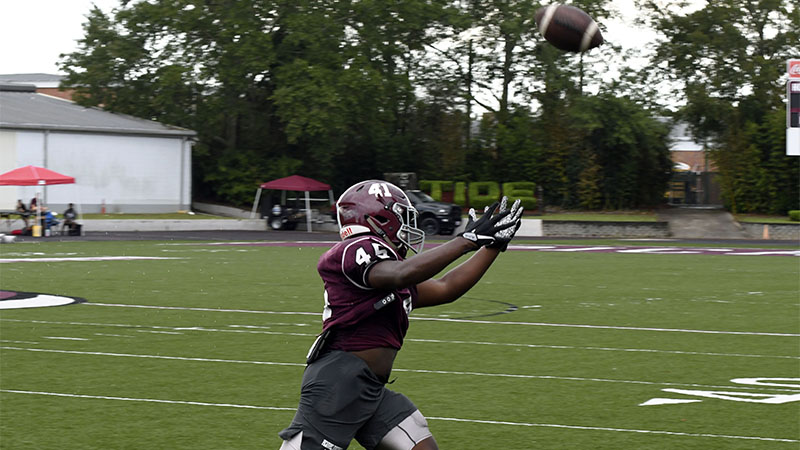 Practice Makes Perfect: The Picayune Maroon Tide football team goes through practice while getting ready for its first game of the season. Photo by Jonathan Mitchell.

Tickets are going to be distributed in several ways to ensure everyone has a fair shot at seeing a Maroon Tide football game this season.

Athletic Director Adam Feeley said that all game participants will be given two tickets each to give to family or friends, which he estimated would likely account for one third of the attendees for home football games.

The rest of the tickets will be available for pre sale the Thursday before a home game, and the day of the game as well.

If there are any tickets left over come game time, they will be sold at the gate.

Feeley said family members and friends of participants can also buy presale tickets, but the school wanted to ensure that there was equal opportunity to grab a ticket for a football game.

“We don’t want to put them all in the public because the kids are performing and now the parents can see them. We want to make sure parents have the option to buy those tickets first, and then move on to whoever else wants to support the Tide,” Feeley said.

Other organizations integral to the Friday night lights experience like the band, Pride of the Tide, color guard and cheerleaders, will all be allowed to perform at home games.

Instead of being in the stands like in years past, the band, color guard and dance team will be in bleachers located in the end zone to allow for more social distancing away from the crowd, meanwhile the cheerleaders will be spread out along the track that separates the field from the bleachers at Lee-Triplett Stadium.

Fans won’t be allowed entry into the stadium without a mask, and social distancing will be encouraged whenever possible.

The normal standing room areas will be marked off, and Feely said families should sit together and stay seated when possible because as people move around it becomes more likely the virus could be spread from one person to another.

Picayune will give a set amount of tickets to their opponent to sell the week leading up to a home game.

If those tickets aren’t sold, the leftovers will likely become available to Maroon Tide fans.

Those same restrictions pertain to Maroon Tide fans when traveling with the team for away games.

Picayune’s first football game will be at Meridian Friday and Feeley said even though they were given nearly 3,000 tickets to sell to fill up the away section, only about 300 were sold.

“There’s going to be plenty of room for our fans traveling with us to spread out,” Feeley said. The current procedures in place are subject to change.

It’s an ongoing process in unprecedented circumstances, so as the season moves forward Feeley asks fans to be understanding of the process in place.

“This is something we’re not used to handling, but we’re trying to handle it the best way we know how. We want to be fair to everybody and each week it could change,” Feeley said.