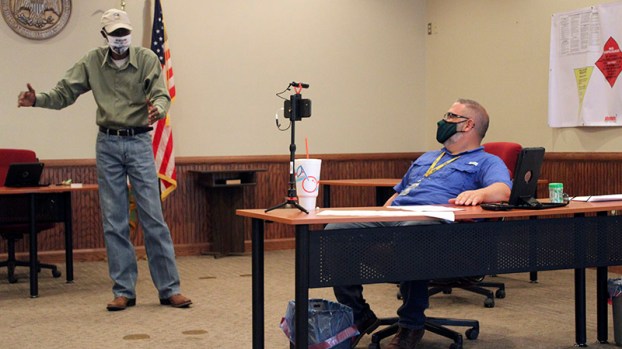 Alderman Kevin Tillman discusses the issues on Todd Street at the regular Board meeting Tuesday with Mayor Rossie Creel. At least two of the problem areas on Todd Street will have patched repairs soon. Photo by Cathy Cook.

Todd Street within Poplarvillee should have at least two problem areas patched this week, funded with money from the 2019 General Obligation Bond.
Jason Lamb with The Walker Associates informed the Poplarville Board of Aldermen that there was approximately $35,000 in unobligated funds remaining.
The Board took Lamb’s suggestion to reserve $10,000 of that funding to create a cushion until the next fiscal year. The city will use $25,000 or less of the remaining bond funds for patching Todd Street in the spots most in need of maintenance, which include near the cemetery and in front of Greenville Baptist Church.
Lamb said he expected the contractor would be able to complete the work on Todd Street by Wednesday after completing repairs on North Street, Michigan Street and Rouse Street.
The patch job should make Todd Street more drivable and reduce maintenance costs for the public works department.
In a separate matter, Police Chief Danny Collier updated the Board that the police department is still having issues submitting NIBRS reports to the state using its new records management system. The department made a second attempt to submit the reports on Friday. The system’s vendor is working to figure out how to fix the issue and should update the software within a few days so that the department can attempt to submit the reports again, said Collier.
The department will need to submit at least six months of reports with a low rate of error to the state by January to meet the deadline for new federal crime reporting requirements. Collier said members of his staff are inputting the data from previous months so that once the issue is resolved they will be prepared.
The Board told Collier that if the reports still cannot be submitted by the end of November, it will start looking for other options.
In other business the Board:
—Approved hiring Hunter Averett as a full time firefighter, and to hire Eric Nixon as a part time firefighter.

A brief overview of firearm laws in Mississippi

In an effort to dispel some of the rumors concerning concealed carry in the state of Mississippi, a member of... read more