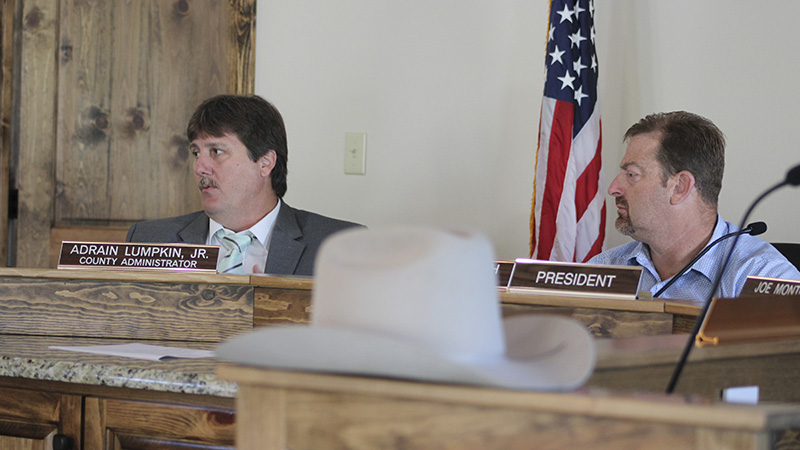 In this file photo, Board of Supervisors President Sandy Kane Smith, at left, listens to County Administrator Adrain Lumpkin during a regular Board meeting. Lumpkin recommended a budget much like last year’s due to anticipated and observed reductions in revenue.

The proposed budget for Pearl River County’s upcoming fiscal year is similar to the previous year, with one exception, an increase in the funds being spent on E911 Dispatch.

The Pearl River County Board of Supervisors will be holding a budget hearing on Sept. 8 at 10 a.m. to listen to any public comments on the budget.

In a typical year, the Board holds budget workshops and listens to department head budget requests. However, County Administrator Adrain Lumpkin recommended they keep the same departmental budgets as the previous year, due to a decrease in revenue.

County revenue is down by approximately $500,000 in the current fiscal year due to COVID-19, he said. Those decreases come from several different places, including fewer court fees collected and fewer inmates being housed in the county jail after the state limited inmate transfers. Lumpkin said he believes that revenue will also be down in the next year, but the county is financially stable enough to manage.

The proposed budget for the county’s general fund has increased from $18.3 million in the previous year to $18.8 million. The increase is due to the E-911 dispatch consolidation, said County Administrator Adrain Lumpkin. The county, along with the cities of Picayune and Poplarville, is working towards a consolidated dispatch center, and has purchased new records management systems for local law enforcement and a new jail management system. The county is paying for 45 percent of the consolidation, while the two municipalities will reimburse the county for their portions of the cost.

The consolidation means purchasing new technology and equipment and it means the county budget now includes the four dispatchers that currently work at the Picayune Police Department. Those dispatchers will become county employees once the consolidation is complete.

The proposed budget includes almost $7 million for public safety. Some of the larger expenses in public safety are items like $2.9 million for sheriff’s department administration, $3 million for the county jail and the $924,000 for E-911 dispatch.

The budget for elections is also included in that $8.5 million and remains the same as last year at $300,000. Lumpkin said it is possible that elections will be more expensive to run due to the pandemic. He explained that the Board has the option to pay poll workers $50, but if they do so they should be able to get reimbursement from the state. The budget for the elections did increase in the 2019-2020 fiscal year due to the purchase of new voting machines, according to previous coverage.

The county budget includes $482,000 for parks and libraries. The budget for health services is set at $602,500. One of the largest expenses under that umbrella is $232,000 for mental health.

The county is planning to put $160,000 toward schools and $160,000 toward conservation. Approximately $950,000 will be funds that are transferred from the general fund to pay bond notes.

The Board is also budgeting $2.5 million to $3 million to renovate the old County Courthouse, but that is not included in the general fund budget.

The courthouse renovation will be funded with $1.7 million in bond money, $350,00 that came from the state Legislature last year and another $200,000 is expected to come from the Legislature, said Lumpkin. The county may add an additional $500,000 if needed, he said.