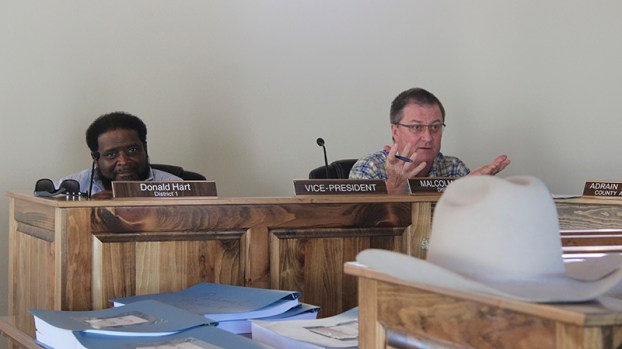 At right, Malcolm Perry proposes enacting a policy that requires raises for non-elected department heads be approved by the Board of Supervisors. Photo by Cathy Cook.

The Pearl River County Board of Supervisors held a budget hearing Tuesday morning to listen to public comments on the proposed budget for the upcoming fiscal year. The millage rate will not increase.

The only public comment was from Chancery Clerk Melinda Bowman. She requested the Board adjust how an expense in the current budget is accounted for. A building expense that should have been applied to the general fund was applied to her department’s budget, said Bowman, which makes it appear as if her department is over budget.

Approximately $162,292 was spent on shelving for county records maintained by the Chancery Clerk’s office. The shelves were installed in the new County Courthouse Annex.

Bowman said that applying the expense to her department makes it look as if her department has “grossly overspent,” when the shelving was necessary for storing county records. Bowman also noted that her budget has been the same for three years, and she reimburses the county for approximately $390,000 of the $607,000 budgeted expenses with fees that come into her office.

County Administrator Adrain Lumpkin said the issue would be corrected before the end of October.

After the public hearing closed, the Board approved adopting the budget and publishing the combined budget.

In a separate matter, the Board discussed and approved bus turnarounds. District IV Supervisor Jason Spence said he was surprised by how many bus turn arounds there are, especially in the Poplarville School District.
The Board entered executive session to discuss personnel matters in the tax office, election security and potential litigation.

—Authorized signing the Local law Enforcement grant, which will provide $4,992 to purchase Tasers for the Pearl River County Sheriff’s Office. $3,744 will come from federal funds, with a $1,248 match of local funds.

—Approved the services agreement between Smart Communications and the county jail. The service is a smart tablet and message service that does not charge the jail facility, but instead charges inmates $0.50 per email sent and $1 for a photo being sent.

The next Board meeting is scheduled for Wednesday, Sept. 23 at 9 a.m. in the Board of Supervisors building.

By Pat Drackett Crosby Arboretum Director Choosing high-performing shrubs for wet areas in the landscape is not always an easy... read more