City of Poplarville, resident in dispute whether road is public or private 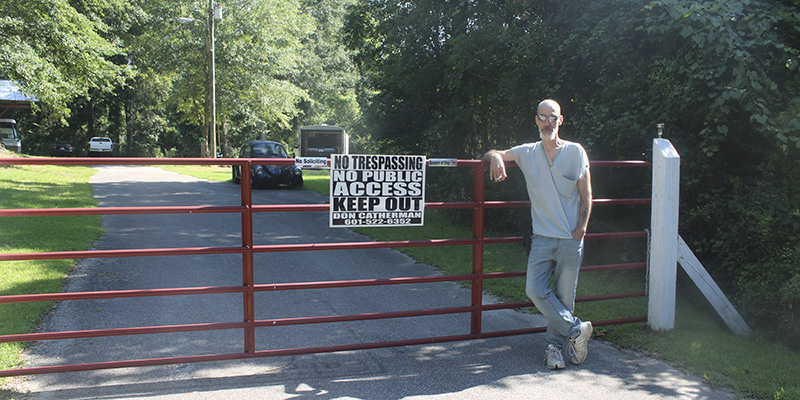 still up: Don Catherman, pictured, was arrested in 2018 for erecting this fence in 2014 on West Scott Street in Poplarville. After his arrest, and subsequent conviction, he put it back up where it has stayed ever since. Cathy Cook | Picayune Item

One Poplarville man is still frustrated by a dispute with the city of Poplarville centered on a gate across a dead end road that leads to his home.

Donald Catherman lives on West Scott Street, where in 2014 he said he erected a gate across the end of the road at his property. The gate blocks access to his property, and to a short stretch of blacktop.

In 2018, the city told Catherman to remove the gate becuase it was erected illegally on city property, according to previous coverage. Catherman said the city wanted access to his property to read the water meter, however Catherman said he does not use city water or sewer services.

Additionally Catherman contends the city does not own West Scott Street and has since done extensive research on street ownership in an effort to prove the street is private.

In March of 2018, Poplarville police officers came to remove the gate. The incident resulted in his arrest and subsequent convictions for obstructing a public street, disturbing the peace and disorderly conduct.

The affidavits state that during the 2018 incident, he disturbed the peace with “indecent, offensive, and boisterous language,” and obstructed the use of a public street with the gate. The disorderly conduct charge resulted from refusing to move the gate after being ordered to do so, according to the affidavit. Catherman argues that the charges were unfounded.
He believes the street is not public and claims the gate was already off its hinges before the police came.

By October 2018, Catherman said he had put his gate back up over the road, where it has remained ever since. In 2019, Catherman filed a federal lawsuit against the city of Poplarville alleging that he was arrested for no reason and that the street is private.

In January, a judge dismissed the federal lawsuit because the allegations challenged the basis of his convictions. The dismissal says that the convictions have to be reversed before his claims, and lawsuit, could proceed. The lawsuit was dismissed with prejudice, so he cannot bring the same facts without new evidence.

The conflicts with the city have taken a toll on Catherman, who suffers from anxiety.

“I wake up thinking about this… about every morning of my life,” he said. “If I’m blocking a damn public street, they’ve been sent notification that my gate was going back up in 2018.”

Prescriptive right of way is part of how a city determines which streets to work on, said Jason Lamb with The Walker Associates. In a hypothetical dispute over ownership of a road, title work can help tell the story of ownership, but determining ownership can be a matter of legal interpretation, he said.

Mayor Rossie Creel declined to comment on the gate and directed any questions about the issue to City Attorney Manya Bryan. Bryan did not return a request for comment. She became the city’s attorney in May of 2018, so was not involved in the case prior to that date.

The city continues to send Catherman notices requesting he pay over $700 in fines associated with his convictions, he said.