Bringing a buzz to the backyard 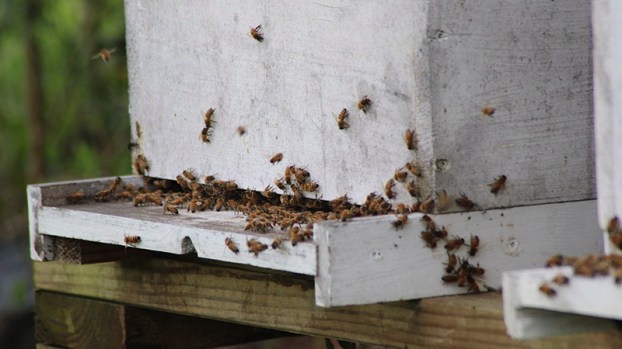 Sweet: Beekeeping can be a fun hobby, although maintaining hives can also be a lot of work, according to beekeeping hobbyist Danny Esler. Cathy Cook | Picayune Item 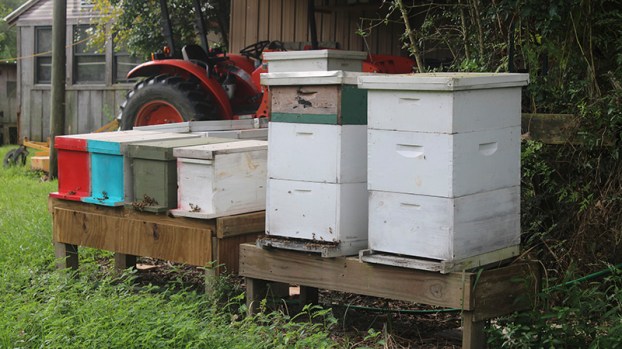 New Hives: The three colorful boxes are nucleus hives--new beehives with everything they need to get started. Cathy Cook | Picayune Item 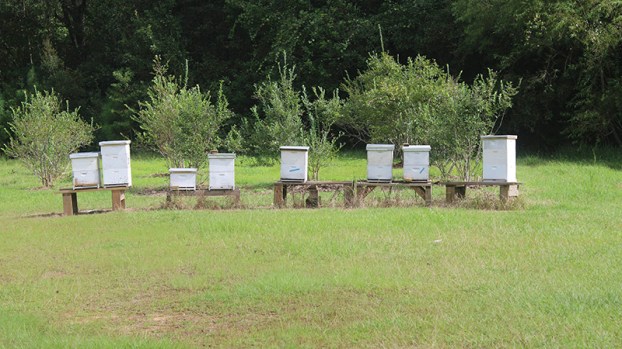 Beehives are much like fortresses, with a queen bee that the colony’s survival depends on and protective guards quick to fix holes in the hive or corner intruders such as hive beetles.

“I’ve been doing this for six years and it’s still fun,” said beekeeper Danny Esler. “It’s still fascinating. Anybody you know who messes with bees will tell you, they’re just blown away by how complex the bee colonies are.”

Beekeeping is a hobby for Esler, but it keeps him busy enough to be like a part time job, and he does sell the honey he harvests. He maintains 50 hives—16 of which are in Slidell, while the rest are around his home in Poplarville. He sells most of his honey in Slidell, just across the state line, because it is a better honey market.

“It’s more city type folks that don’t even think about having their own bees, but out here in the country a lot of people can have their own bees,” he said.

Bees are vital pollinators and often misunderstood, he said.

On rainy windy days, they’re not in the best mood, so Esler tries to work his bees on sunny days, when the bees are “like a lamb,” he said.

He started beekeeping to improve his substantial garden. On years when there were more bees around to pollinate, the garden flourished, so he bought bees from a local beekeeper and started six hives of his own.

Every year Esler increases the number of hives he maintains and is constantly learning new things about bees. This year he reared his own queens for the first time, although he had to try some unorthodox methods due to his poor eyesight.

“You’ve got to find eggs and the eggs are tiny, tiny, tiny, like a pinhead and they’re down in the cell,” he said.

A new beehive needs a queen bee and honey to survive, and can be created by splitting an existing hive, trapping a swarm of bees looking for a new home or purchasing bees from a commercial beekeeper.

“All beekeepers lose hives, some years worse than others. That’s why we constantly have to keep making new hives to replace our losses,” he said.

Esler estimates he loses around 30 percent of his bees every year, and it’s hard to say exactly why.

“Some people think pesticides. Nobody really knows exactly. Nobody can pinpoint one certain thing that’s doing it,” said Esler.

It is hard to keep a hive alive for three years, said Esler and honey production drops off after the first year.

Other insects like mites can cause a hive to fail, which is a problem he can manage by treating the beehive.

Often new beekeepers give up after losing a hive or two, said Esler.

Although failing hives are not uncommon, Esler is deeply impressed by the insect’s survival instincts and cleanliness.

Bees communicate the location of nectar to each other by dancing near other bees in front of the hive. The insects also know to reduce the honey to 17 to 18 percent moisture by fanning it before sealing it with propolis into the honeycomb cells. If too much moisture is in the honey, it ferments.

“The bees won’t do that, they’re not stupid,” said Esler. “They’re going to reduce it down, then they’ll cap it with a thin, thin wax.”

Harvesting honey is his favorite part of beekeeping. He removes a frame of honeycomb from the hive and gently shakes off all the bees. Then he uses a capping fork to remove the wax sealing the honey in. Three frames at a time are placed in a frame extractor, which uses centrifugal force to pull the honey from the cells.

He strains it, then lets the honey set for a day or two so the air that was introduced while it was spinning can rise to the top. Finally he jars it.

“We need new beekeepers. The wild doesn’t have very many bees anymore. All your bees are in boxes like this. We need people to pick up where us old folks are dying off.”