Aldermen resolve not to raise taxes 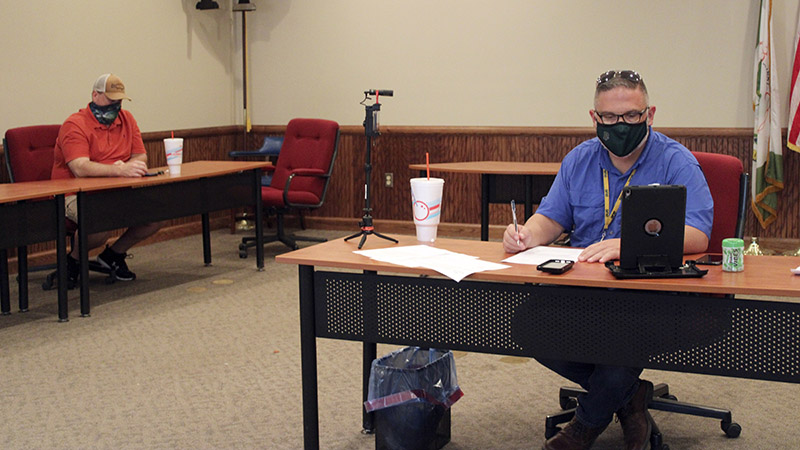 Alderman Russell Miller and Mayor Rossie Creel practice social distancing during the regular Board meeting Tuesday. Four people attended the meeting in person, while others attended via videoconference. Photo by Cathy Cook.

Poplarville’s Board of Aldermen resolved to keep the millage rate the same in the upcoming fiscal year, at 54.5 mills.

The mills will go toward the city’s general fund, with one fourth of a mill going toward fire protection and one mill to fund the library, as required by law.

In a separate matter, a Poplarville patrol vehicle that had minor damage should be back on the road soon. Approximately two weeks ago, an officer on patrol took a turn too sharply and scraped two of the vehicle’s doors on a curb, said Police Chief Danny Collier. Insurance covered the repair. Collier told the Board that the body shop owner planned to make a $500 donation to the police department after the repair was complete—the same amount as the department’s deductible.

In a separate matter, Martin Luther King Jr. Drive will get some more improvements. The street recently had work done to improve drainage ditches. Jason Lamb with The Walker Associates and Public Works Director Sam Hale will get measurements to potentially add sod back in the areas that have been repaired to protect the shoulder of the roadway from erosion.

The Board took the issue under advisement to give the city attorney time to draft a potential amendment to the ordinance.