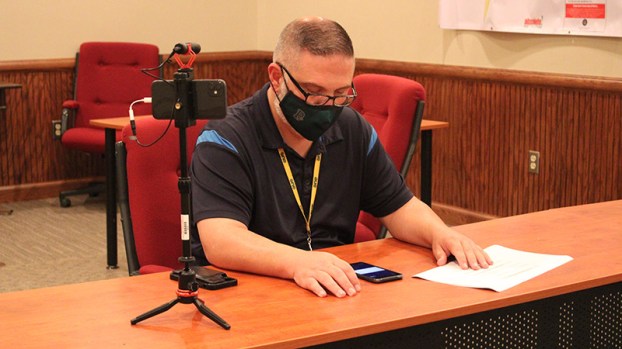 Poplarville’s Board of Aldermen outlined the city’s proposed budget for fiscal year 2020-2021 during a budget hearing held Thursday.
The overall city budget is $4.8 million. There are no tax increases, so the millage remains at 54.5 mills. A mill in Poplarville is approximately $17,000, said City Clerk Jane O’Neal.

The budget hearing was live streamed over social media, and most Board members attended via video conference. Mayor Rossie Creel asked online viewers to address any budget questions via online comments on the live stream. No one commented with questions while the meeting was streaming, but two questions were posted shortly after the meeting, which Creel answered via Facebook comments.

The budget for the Mayor and Board has decreased from the previous year by $2,000 to $113,272 due to a smaller travel budget.

The court budget has increased to $91,451. The city added $26,095 for overtime costs and $2,500 for professional fees for any judges or attorneys to fill in for court personnel.

The city’s general administration budget is set at $296,367, a $4,500 increase from the previous year due to the cost of election services in the upcoming general election in 2021.

The police department budget increased to $788,220. Additions included $8,220 for roof repairs, $20,000 for the possible purchase of a used police cruiser and $3,000 for the anticipated purchase of bulletproof vests.

The city budgeted $50,000 for E-911 dispatch services and an additional $8,276 for E-911 IT services in the upcoming fiscal year, an expense the Board did not have previously. Although the police department has $7,747 in its forfeiture fund, there is nothing budgeted with that money and it will be used as a contingency fund.

The fire department budget is set at $389,442, a $29,072 decrease. The budget for truck repairs and parts has increased, as has the uniform budget. The reduction was made in the amount set aside for capital equipment purchases.

The animal control budget remained the same at $500, as did the $19,279 budget for code enforcement and the $20,000 cemetery budget. The parks, recreation and library budget decreased to $234,224 due to a reduction in capital outlay costs. The airport budget increased from the previous year by $4,899 to $13,000, due to grant match funds required to install new lighting along the airport’s runaway.

The sewer and water budget will be $1.16 million, similar to the previous year’s. The water fund is kept separate from the general fund used to pay for the rest of the city’s expenses.

The unemployment compensation fund is at $13,325.

The city has a cash reserve of $1.9 million, which has not been used to balance the budget and will be reserved in case of an emergency, said O’Neal. The city also has $467,744 in general investment. The city maintains a contingency fund totaling six months of revenue and investments in case a major emergency occurs, such as a hurricane.

The city will be paying $122,248 in debt services for the 2019 General Obligation Bonds, which were used to fund paving and drainage repairs. The city will pay $77,725 in debt services for the College Square TIF Bond. The TIF Bond will reimburse the developer of the College Square Shopping Center for some of the construction costs. The TIF Bond will be issued in September or October.

The total city revenue from all sources is projected at $5.1 million, which includes $2.8 million in revenue plus the cash reserve and general investment.

The city is expected to raise $910,078 through ad valorem taxes, $1 million in sales tax and $201,371 from licenses and permits. The city is expected to get $72,323 in intergovernmental revenue, which includes items like homestead exemption and the gasoline tax. The budget includes $248,009 in state, federal and local grant funding.

The Mississippi Infrastructure Modernization Act Fund, which comes from online sales tax, is projected to bring the city $45,543.

Court fine collections are estimated to bring in $28,000, with an additional $1,500 in miscellaneous court revenue.