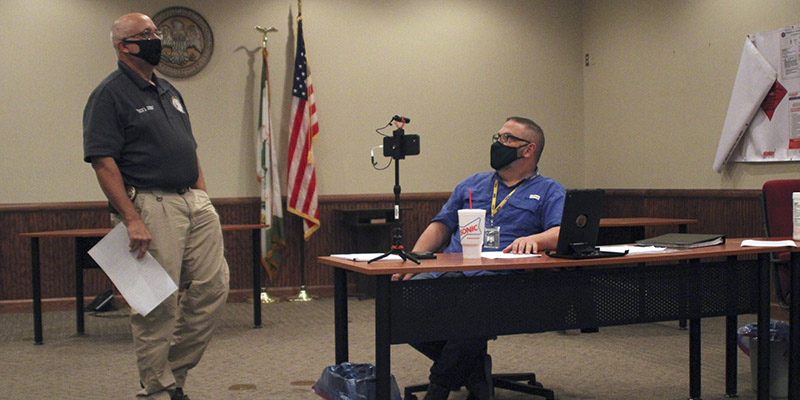 Poplarville Police Chief Danny Collier gives the Board of Aldermen and Mayor an update on NIBRS reporting. The department has been able to successfully submit some reports, while others are still being rejected.

The Poplarville Board of Aldermen is still considering how to handle burying urns in the city cemetery, and seems to be leaning toward allowing up to two urns to be buried in a plot.

The Board received a request from a city resident for permission to bury three urns in one plot, but the city ordinances include nothing about burying urns. So, city officials have been researching what practices are normal at other cemeteries when it comes to burying urns.

Based on conversations with funeral directors, city officials believe burying two urns to a plot, one at the head and one at the foot of a grave, is what is allowed at most cemeteries in the area.

Mayor Rossie Creel recommended allowing two to a plot, based on the existing city ordinance that allows people to erect a columbarium that can house up to two urns. The city attorney will draft an ordinance for the Board to consider at its next meeting.

In a separate matter, the Board heard an update from Police Chief Danny Collier on the department’s progress in transitioning to the new reporting system. The department needs to have six months of NIBRS reports submitted to the state by January.

The department was able to successfully submit a month of reports, said Collier, but has had some issues with other reports that have been rejected. Some of the reports have been rejected based on errors from the police department, but some of the reports are still being rejected due to issues with the records management system software. Collier said both the company providing the records management system and the Department of Public Safety staff have been working with the police department to fix the issues as they arise.

The Board entered executive session to discuss personnel matters and potential litigation.

—Accepted the resignation of police officer Shawn Vinson and approved posting the job opening for a full time officer position.