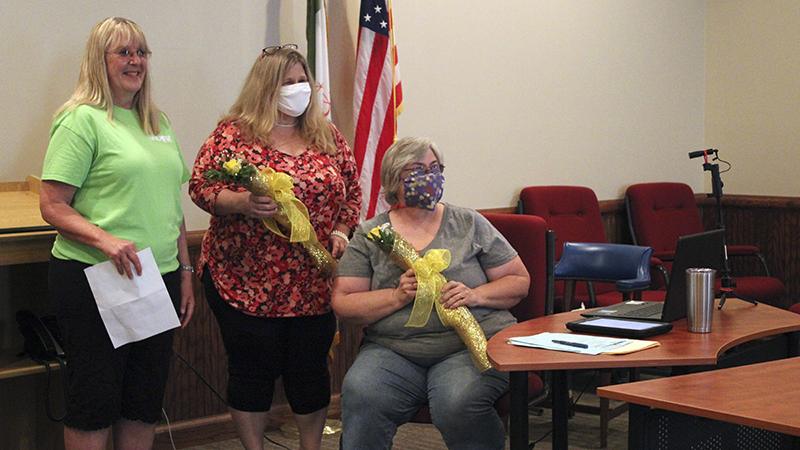 Poplarville Women’s Club presented local women who serve in public office with yellow roses to celebrate the 100th anniversary of the 19th Amendment, which gave women the right to vote on Aug. 18, 1920, during Tuesday’s meeting of the Board of Aldermen.
The two women on the Poplarville Board of Aldermen, Shirley Wiltshire and Anne Smith, were presented with the roses at the beginning of the meeting.
Poplarville Women’s Club President Dawn Vosbein said the group also presented Chancery Clerk Melinda Bowman and Circuit Clerk Nance Stokes with roses earlier in the day.
“Wearing a yellow rose signified support for women’s suffrage,” said Vosbein.
Although the Board has been utilizing Facebook Live and Zoom for meetings over the last month, Tuesday’s meeting was plagued with additional technical difficulties, like the majority of the Board members being unable to hear the presentation of roses, because Wiltshire was muted on the videoconference and the Board attorney being muted on the videoconference and having to call in instead.
The Board approved a project design for a pavilion planned for City Square Park. The pavilion would include a stage and restroom. The project is being funded by a $150,000 grant from the Mississippi Development Authority’s Small Municipalities Limited Population Grant Program.
A previous version of the design brought in bids far higher than expected and outside of the grant award, so architect Christian Landry with Landry, Lewis and Germany Architects presented a simplified version of the design for approval.
The new design calls for cheaper materials and makes the stairs that were planned to wrap around the pavilion an alternate. Landry said that while the stairs are an important part of the design, they were also an expensive component. Making them an alternate add on will give the Board flexibility to pull the stairs out if that part of the project proves too expensive. It also provides a cost estimate if the city wants to add the stairs later, said Landry.
The new design also has simplified restrooms, a cheaper roof, less power capability and less structural steel, he said.
In a separate matter, Police Chief Danny Collier gave the Board an update on the department’s efforts to become compliant with the National Incident-Based Reporting System.
The department has input information from past crime reports into the new records management system, but as of yet is unable to submit that data to the state. The state has given the department a list of problems that need to be resolved with the software so the reports can be sent, which has been passed on to the software company, said Collier. Collier said he was told the software company is working to fix the issues.