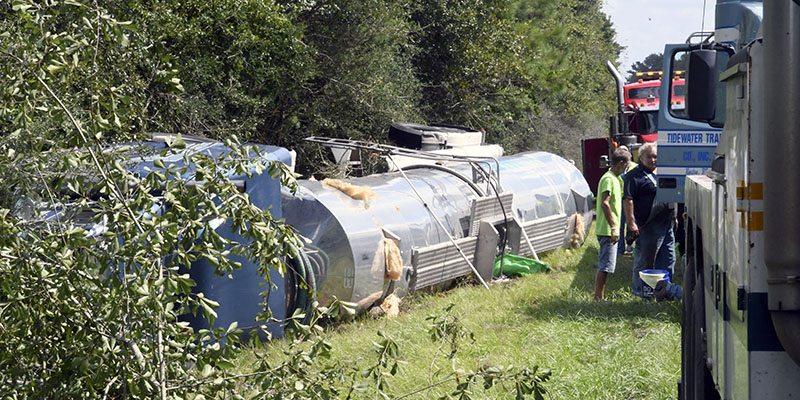 Cleanup time: A semi truck filled with detergent overturned on Interstate 59 Thursday evening, leaving emergency crews to initiate a long process to pump out the substance before removing the truck from the tree line. Jonathan Mitchell | Picayune Item

Emergency personnel worked two accidents recently, one of which claimed the life of a Picayune man.

Tuesday night Mississippi Highway Patrol responded to a two-vehicle collision at the intersection of Highway 43 South and Cesar Road at 8:38 p.m. on Aug. 18 that resulted in the death of a local resident, said Trooper Cal Robertson.

After the two vehicles collided, the Volkswagen Beetle went into a ditch and flipped.

Emergency personnel responded to find the driver of the Volkswagen, identified as Gregory Balarillo, 50, of Picayune, was unconscious. He was transported to Highland Community Hospital where he was later pronounced.

The Volkswagen had one passenger, who suffered moderate injuries and was also transported to Highland Community Hospital. She was last described as being in stable condition.

The driver of the Toyota also suffered moderate injuries and was also transported to the hospital.

Everyone involved are Picayune residents.

The second accident occurred Thursday evening at 4:43 where a semi-truck loaded with 44,000 pounds of detergent overturned on Interstate 59, Robertson said. Mississippi Highway Patrol responded to the single-vehicle incident to find that while the truck was loaded with detergent, the substance was deemed not explosive or harmful, said Robertson.

Investigation into the cause of the accident determined the driver suffered from a medical condition and left the road on the right hand side into the tree line. After hitting the treeline the semi-truck overturned onto its side. The driver was transported to a local hospital with minor injuries.

The detergent was pumped from the trailer Friday morning as part of the process to clean up the scene.