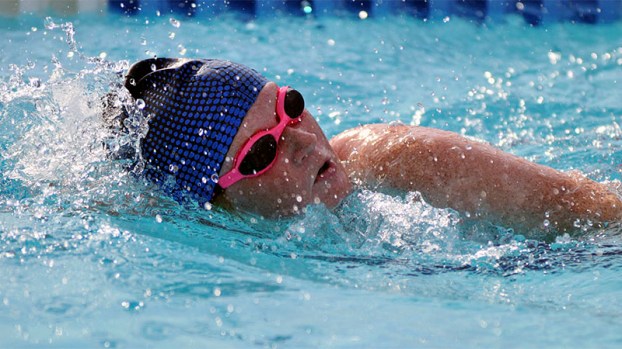 New Blood: Pearl River Central swimmer Kelsey Dill comes up for air during a meet last year. Dill has since graduated, which means the new athletes on the team will have to make up for that loss. File photo by Jonathan Mitchell.

The week of tryouts has finally ended for athletes in the Pearl River Central and Picayune swim programs, with practices set to start this week.

Nearly half of Head Coach Rachael Rutherford’s team this season will be new.

The roster will have 19 athletes for the 2020 season, 9 of which are rookies to the program.

To begin the week the tryouts were more focused on technique and educating the new athletes on the proper way to swim.

However, the final days saw the intensity ramp up a bit as Rutherford looked to see which athletes were capable of challenging themselves.

“That’s what I was looking for overall were kids interested in the sport, interested in learning and pushing themselves past their threshold,” Rutherford said. On the final day of tryouts Rutherford announced the athletes had made the team, and then proceeded to hand out mesh bags with equipment for every individual swimmer.

This precaution was put in place to limit the amount of sharing that goes on between teammates with each athlete having their own kickboard, buoys and other necessary equipment.

The swimmers are trying out in the midst of a pandemic, which could’ve been enough to put some swimmers off.

In order to come closer together as a group, the athletes have used the unprecedented circumstances as a way to bond as a team.

“So far I feel like it’s creating a sense of community because they’re coming in and doing something together. The COVID-19 situation is making the kids appreciate the sport and appreciate the time they’re spending together,” Rutherford said.

Head Coach Blake Rutherford’s team saw seven new athletes join up and take part in the weeklong tryout process. The new swimmers surprised the coach as they progressed during the week, and by the end of the process they were practicing with the veterans from last season.

“I’ve been able to see the same seven progress each day. We’ve done time trials and had them do more and more with the veteran swimmers each and every day,” Blake Rutherford said.

Following the announcement of the roster on Monday, Rutherford said the team will work on procedures and routines for the first week of practices because of COVID-19.

However, once the protocols have been established and the athletes understand how to properly go about practicing, the workouts will become more physically demanding.

“The first weeks of practice will be technique and aerobic focused. This year we will have to get to aerobic swimming quicker, due to our first meet being an invitational two weeks from the first practice,” Blake Rutherford said.

Like the Picayune program, the PRC swimmers are practicing and preparing for competition in an unusual time. Instead of letting the pandemic affect the team negatively, Blake Rutherford said he thinks his team will be able to grow because of the trials and tribulations the athletes will face together.

“COVID has created a few hurdles, but I think the positive will be a smaller more intimate ‘family’ atmosphere.  We have had a great team relationship in the past, and I feel COVID will just enhance that,” Blake Rutherford said.

The Mississippi High School Activities Association released a set of policies and regulations for football coaches to follow as full... read more