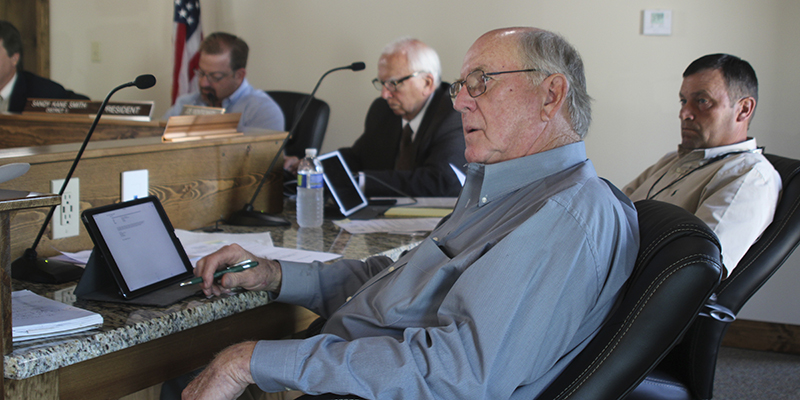 Too much?: District III Supervisor Hudson Holliday voiced concerns about how broad some of the county ordinances concerning derelict property are. Photo by Cathy Cook.

Pearl River County’s Board of Supervisors is working with the county’s code enforcement officer to make it easier to consistently enforce county codes concerning littering and derelict property.

During Monday’s meeting, the Board discussed a proposed ordinance to allow the county to issue tickets and fines for violations of litter, refuse and derelict property ordinances.

Code Enforcement Officer Kolby Davis explained that the county currently does not have a penalty mechanism for enforcing codes, aside from the state penalty, which is more extreme. The proposed ordinance is intended to create a penalty, a ticket with a small fee of $50 or $100 that could be used to enforce county codes instead of choosing to either rely on the state level ordinance, which can result in a misdemeanor, or not having any penalty.

Davis explained that all of the codes outlined in the proposed ordinance were summaries of the codes that are already in effect in Pearl River County, but are difficult to enforce because it is difficult to penalize people for breaking them. The only change would be adding the new penalty. Some people in the county have seen more extreme penalties and had to go to court for the rules that Holliday was concerned with, said Davis.

County Attorney Joe Montgomery asked the Board members to hold a workshop with Davis to determine how to rewrite the proposed ordinance so that it would be clearer about code violations, but still add a county level penalty.

In a separate matter, Executive Director for the Community of Christians Helping Youth Roy Acker came to the Board to request funding for the organization in the upcoming school year. The organization offers free mentoring for K-12 students in STEAM—science, technology, engineering, art and math. On average the after school program serves 25 students and has a budget of $95,000. COVID-19 has impacted some of the nonprofit’s funding sources, he said.

Board President Sandy Kane Smith said the Board would keep the organization in mind when it began budgeting for the upcoming fiscal year. District II Supervisor Malcolm Perry asked Nuria Arias, who is researching grants for the county, to look into grants that may help fund CCHY.

The next Board meeting will be Wednesday August 19 at 9 a.m.