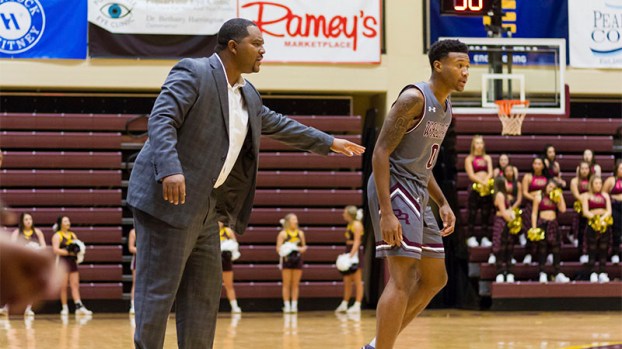 Giving Direction: Head Coach Chris Oney gives instructions to one of his players during a game last year.

Pearl River Community College’s men’s basketball program is coming off an undefeated season that was cut short by COVID-19, so now the players and coaches are looking forward to using the fall semester as a time to grow closer together and prepare for the upcoming season.

Head Coach Chris Oney said the team losing out on the chance to compete for a national championship, along with normal summer training sessions, means the fall will have to serve multiple purposes.

Not only will the athletes have to get back into game shape, but they’ll also have to grow closer as a team after missing out on the summer practices.

The program’s competitive start date has been moved back to January because of COVID-19, so the fall will consist of practices and a few scrimmages as well.

Oney said he’s been in contact with PRCC’s baseball coach Michael Avalon because this year the basketball schedule will mimic what the baseball team usually does.

Even though the baseball season has always taken place in the spring, the team will still practice and compete in scrimmages during the fall to keep players sharp.

Oney said that formula will be followed by the basketball program as well while trying to adapt to the new schedule set up by the National Junior College Athletic Association.

“This is the thing, with baseball they compete in the fall but their real games, conference games and championships are in the spring. I’ll have more talks with him about how they approach it and how they go from there,” Oney said.

As far as practices go, Oney said the plan is to split the team into small groups while working out inside, possibly pairing roommates and suitemates together, in order to limit the amount of contact between the athletes.

When the team practices outside that won’t be as necessary because the player will be able to distance themself from others when the team does conditioning drills on the football field.

No matter where the team is practicing, Oney said he and his staff are going to emphasize the importance of the players taking the health guidelines seriously so the team can continue working out and preparing for the delayed season.

“I guess first and foremost we’re trying to harp on the safety aspect of it because we’re not like the NBA so we don’t have a bubble. They’re going to be tempted to go out to Hattiesburg and other towns and be around other people, so we’ll try to educate them on being as safe as they can,” Oney said.

Not only do athletes and coaches have to adapt their plans because of COVID-19, officials have also been hard at... read more