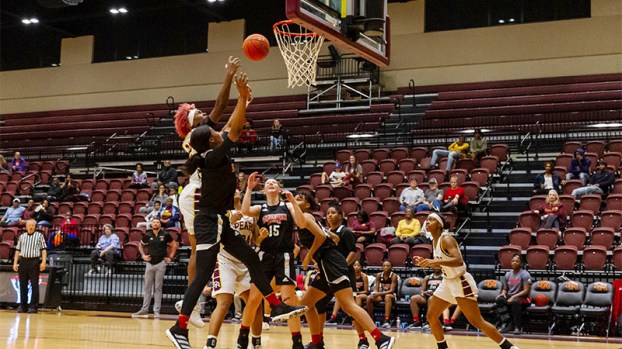 Hard At Work: Following the delay of their season, the PRCC Lady Wildcats' basketball team is putting in the time this fall to prepare for their winter start date.

PRCC women’s basketball back in the swing of things

Pearl River Community College’s women’s basketball program is finally back in the gym and hard at work while following the proper COVID-19 protocols.

The team’s competitive start date has been moved to January due to the National Junior College Athletic Association’s decision to delay sports during the pandemic.

With more time than ever to prepare, Head Coach Scotty Fletcher and his athletes will be using practices, workouts and the three scrimmages the team is allowed in the fall to get ready for the season.

However, they’re doing it in a safe manner with the program following CDC guidelines when it comes to working out.

Practice gear is sanitized, coaches and trainers are wearing masks and the athletes are paired up and socially distanced during weight room sessions to limit the possibility of spreading the virus.

The situation may be unusual, but following five months of chaos the athletes are happy to be back on the grind.

“I think it’s been overwhelming, the support and excitement. The energy has been contagious and I think that’s a direct reflection of the last five months of dealing with COVID-19,” Fletcher said. The athletes are taking their responsibility seriously when it comes to limiting the spread of the virus by wearing masks outside of practice and practicing social distancing.

Fletcher said even during the process of moving the athletes into their dorms, the players and guardians who accompanied them were all on board in trying to prevent the spread.

“I have not seen the students being loose in how they approach every day. That’s been the most impressive thing is even when we moved them in, it was overwhelming the support and participation of wearing a mask and wearing it properly,” Fletcher said.

The plan is to ease the athletes back into the intense practices and workouts they’re used to.

Because of the months of inactivity Fletcher understands the importance of taking it slow in order to prevent injuries.

“I’m well aware of the time off the athletes had and you have to be cognizant of their bodies to not create muscle fatigue. We’re just laying the foundation. This is a marathon not a sprint,” Fletcher said.

At the moment the team will still be able to have a season, so the financial windfalls of the pandemic may not hit the program that hard. Fletcher compared this season to a year that entails a major hurricane, saying that although the COVID-19 situation is unprecedented, a lot of the same delays and problems faced after a hurricane are currently being faced.

The athletic events may not have the same crowd numbers as before, but the unifying nature of sports means people will have something to look forward to during these strange times.

“The fact that we’ll get to participate and play is rewarding. That just allows communities to connect. I know this year attendance will be stricter than ever, but it also allows for more conversation and excitement,” Fletcher said.