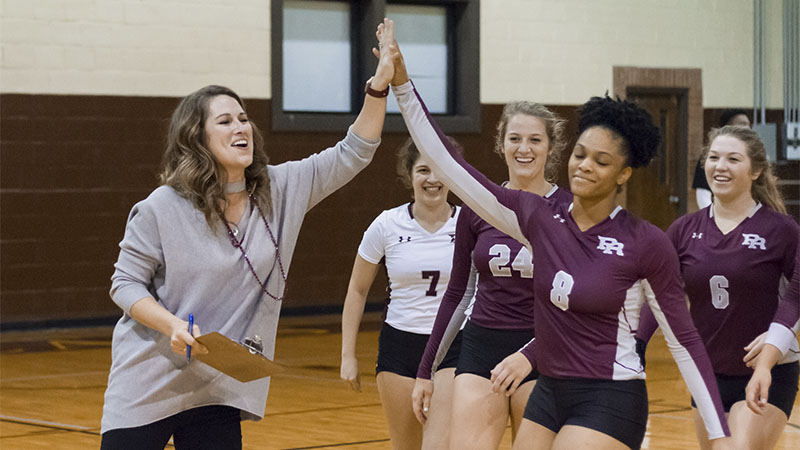 Proactive Approach: Head Coach Haley Chatham high fives a player during a game last season. The team has been planning ahead in regards to COVID-19 protocols and are now putting them into place.

It didn’t come as a shock to the Pearl River Community College volleyball program when their season was moved to the spring, and now their foresight is helping them prepare in safe way.

Head Coach Haley Chatham said it was expected that their season would be delayed, so the staff made the necessary arrangements for practices ahead of time.

The team’s move in date was pushed back, and the players are now in preparation mode.

Chatham will have eight hours a week to spend with her athletes working out and training, until the team’s allowed 60 day period of full practices starts in September.

The National Junior College Athletic Association limited practice times for teams, which is why the Lady Wildcats will only have 60 days of training this fall.

PRCC will also only be able to participate in four scrimmages during the fall, although at the moment there are only three match ups on the schedule because an opponent had to cancel a game.

Chatham said the extended period prior to the start of the season will allow for more instruction than would usually take place before competition began.

“We’re going to have a long preseason and we’re getting a lot of good time to teach, learn and get stronger before the season starts in January,” Chatham said.

Chatham said there was a mix of excitement and nervousness from the athletes as they returned to the court, especially from players who are new to the program.

However, the elder athletes on the team stepped up and made the incoming freshmen feel at home.

“I think they were really excited. We had some jitters from our freshmen, but the sophomores did a great job of taking them under their wings and showing them around. I think everybody is excited to get back to a sense of normalcy,” Chatham said.

The team wants to have a season, and because of that they’re taking all the precautions seriously when it comes to masks, social distancing and personal hygiene to ensure the season goes off without a hitch.

“They know if we do our part then we can get this thing out of here and get back to a more normal (life). We’re all really committed to wearing masks, washing hands and following the rules,” Chatham said.

When it comes to the program’s budget, the delay of the season won’t really affect much.

Chatham said the support of the school, along with the satellite camps the program was able to take part in over the summer, means the team is in a good spot financially even with the chaos caused by COVID-19.

“Our administration does a really great job of supporting us and making sure we have what we need no matter what. That’s never been in question. Plus, volleyball is not a huge elaborate sport that requires a lot of money,” Chatham said.

The program is set to start competitive play on Jan. 22 with games set to stop at the end of March.