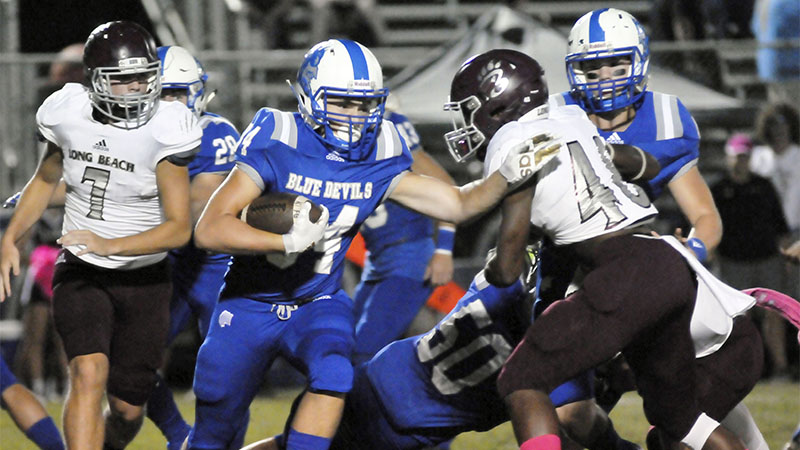 High school sports will look a little different this year as Gov. Tate Reeves announced there would be limits on spectator attendance for the upcoming seasons.

Only two people per participant will be allowed to enter the stadium from a fan perspective, while necessary staff, media and other personnel are still allowed to attend.

As of right now, Pearl River Central is planning on having its band, dance team, cheerleaders and football team participate in the Friday night showdowns.

PRC Athletic Director Chris Teal said it would’ve been a shame for these programs to have worked so hard and then not be able to perform.

“We looked at it from the standpoint that they’re all practicing and need to perform. If we’re hosting a game they need to have the opportunity to perform. That’s how we’re basing our numbers at this point,” Teal said.

That means for home games, each member of the participating programs would be allowed to have two people attend the game as spectators.

However, away games may be a different story.

Teal said discussions are ongoing as to who will be allowed to enter a stadium as part of a traveling party, but at the moment it looks like it may be just the football team and cheerleaders allowed to travel to away games.

All tickets will be presold and there is no plan to have a ticket gate open at home games.

This will limit crowding at the stadium’s entry point and allow the school to more accurately determine who is allowed to enter the stadium to watch the game.

“We’re going to do the same thing with visitors. We’re going to presale those tickets so they can have the same information, that there will be no tickets being sold at the ticket gate so we can control our numbers,” Teal said.

However, for fans who will be missing out on the Friday night lights experience, there will be a way to still enjoy the action.

PRC has a livestream system set up through the National Federation of High Schools that will stream any action taking place on the field or in the school’s gym.

All interested parties have to do is buy a subscription to the streaming service, and then they’ll be able to watch any game taking place in those two areas.

“We do have the NFHS system so we’ll be pushing out subscriptions to those. We purchased that thing four years ago when they first came on site.”

There are also other experiences that usually coincide with a PRC football game like tailgating and other activities.

There are also picnic areas on the western end zone that spectators usually pay for where they’d sit and watch the game.

There hasn’t been a decision made on how tailgating will be regulated, or if people will be allowed to use the picnic areas, but Teal said talks are still taking place to determine the best possible solution that’ll satisfy all parties.

“Every stadium is going to be different. Some are going to be bigger, or smaller like ours. It’s going to look different going to other places with bigger stadiums, but it’ll be the same with participants and the people getting into the game,” Teal said.