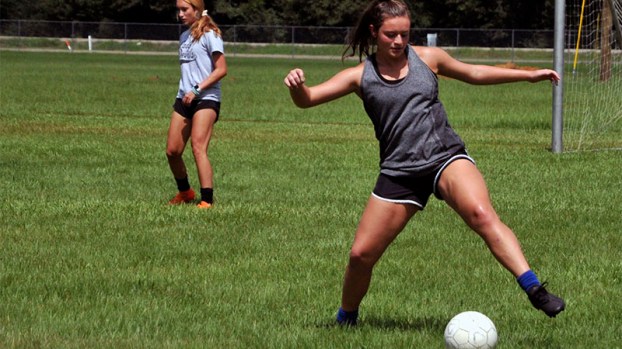 Staying Conditioned: Often times there is overlap between the athletes that are part of the soccer and cross country teams because the running helps the athlete stay in shape. File photo by Jonathan Mitchell.

Thursday evening was the final chance for athletes to earn a spot on the Pearl River Central cross country roster as Head Coach Mike Hindman looks to prepare his team for the fast approaching competitions.

Because of the high school’s revamped schedule due to COVID-19, and the immense Mississippi heat, Hindman has been holding tryouts and workouts at 6 p.m.

This gives athletes time to go home, study, work around the house and then come back to campus for a workout.

The workouts are going to quickly become more rigorous because the team only has two weeks to prepare for the first meet of the year at the George County Trail Run on Sept. 3.

“We’re going to have a rough couple of weeks ahead of our first meet because right now I only have a handful of kids ready for that meet,” Hindman said.

There’s still some aspects of the season that aren’t set in stone, the main one being transportation.

COVID-19 guidelines have restricted the number of children allowed on one bus, so right now the program is hoping two buses can be used to transport athletes to and from meets.

However, it’s unknown what kind of resources will be available and how often the buses will be ready for use.

In the past, Hindman was able to bring every athlete on the team to a meet, but in the current social climate that may not be possible.

If there does end up being a limit on the number of athletes Hindman can bring to a meet, he said he’d likely have a time trial race a day or two before the actual meet to identify the athletes with the best times who will travel to the competition.

“I know some schools that are extremely competitive where that has been the case and that’s how they operate, but we’ve never been in that situation, that boat,” Hindman said.

Before tryouts began it looked like determining who traveled to competitions would be even harder with Hindman receiving word from parents across the district about their child being interested in signing up.

However, when the time came for tryouts to begin the numbers weren’t as high as expected.

“I was overwhelmed with the number of kids I thought would be trying out for cross country and it just hasn’t been that way. You have to chalk it up to COVID,” Hindman said.

However, those students who do decide to be a part of the program will see the benefits that come with it.

Hindman said cross country is a sport for everybody, even the athletes who don’t necessarily fit into other sports like football or basketball.

This year, with COVID-19 and the unprecedented circumstances of a pandemic, it’ll be even more beneficial for the athletes to be part of a group and grow into a healthy lifestyle.

“I have kids on my team who won’t go any further with running than high school cross country and that’s perfectly fine.”

“They’re doing it to improve their health and be part of a group, and they’re enjoying it,” Hindman said.