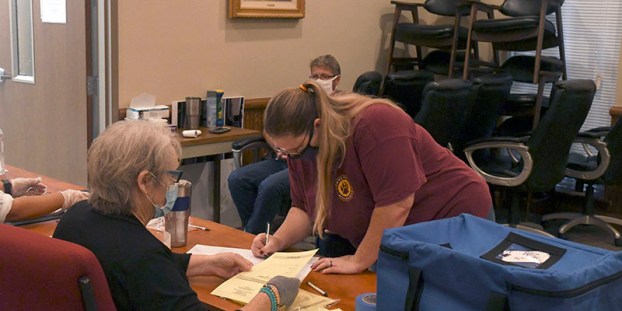 Catherine Griffin votes during the Poplarville Alderman-at-Large election Tuesday. By 2 p.m. 105 people had cast their ballots. Photo by Jonathan Mitchell

Poplarville will need to hold a runoff election to determine who will fill the vacant seat on the Board of Aldermen.

Results from the Poplarville Alderman-at-Large special election to fill the seat left vacant when Alderman Tony Smith resigned are currently unofficial. Five candidates ran for the open seat. There were 266 ballots cast, including absentee ballots and votes cast on election day.

Since no candidate received a majority, which means 50 percent of the vote plus one vote, a runoff election between the top two candidates, Daniel H. Brown and Jacob Cochran, will be held in three weeks on Sept. 15.

Within Pottery and More and the adjoining Sugar Mama’s Cakery, faith, family and friends are the keys to their success.... read more