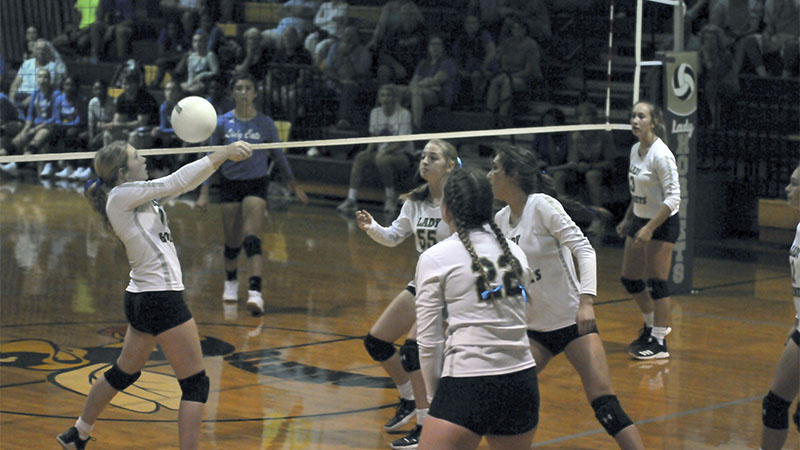 Positioning: A new year means new players on the court for the Lady Hornets volleyball team, so now the athletes have to become acclimated to each others' playing style and what areas of the floor they cover. File photo by Jonathan Mitchell.

The Poplarville Lady Hornets took on the Perry Central Lady Bulldogs Tuesday evening and won the match without losing a set.

The clean sweep saw the Lady Hornets earn their first victory of the season, and first victory under new Head Coach Robin Jeffries.

The game was the first time in nearly a year the players were able to compete against another team after Poplarville’s opportunities to compete in the summer and early fall periods were cancelled due to COVID-19.

However, the lack of outside competition didn’t seem to faze the athletes as they handily defeated Perry Central.

“The best thing was they had fun. They just really got into a rhythm and enjoyed being out there,” Jeffries said.

The first game jitters were present for the Lady Hornets, but didn’t end up being a huge factor.

Once the game began and the players were again back into the normalcy of a volleyball match the nerves disappeared.

“It took about midway through the first set to sort of play (out). That’s typical with it being first match. They just loosened up and just had fun with it,” Jeffries said.

Jeffries said the first performance came with some positives as the athletes became more comfortable on the court.

This group of players hadn’t been in a competitive environment before as a unit, so it took some adjusting.

“Just learning our rotation was a big one. Learning where to go and being in the right position at the right time,” Jeffries said.

There were COVID-19 procedures in place the team had to follow when traveling to take on the Lady Bulldogs.

Athletes had to wear a mask unless they were playing, and were required to be in game attire before boarding the bus because locker rooms weren’t going to be available.

There were also limits on attendance, which Jeffries said was rough for the players who had several family members wanting to go to the game.

“We can only allow two people to go to the game and some of the players were disappointed because they wanted more to be able to come. The crowd was a little low, but we still had great parent support,” Jeffries said.

While playing during a pandemic is new for everyone involved, the environment itself mirrored that of a normal game.

Jeffries said fans were cheering and the intensity of the game didn’t suffer because of the COVID-19 restrictions.